When I paddle out for dawn patrol, my body consists of 95% caffeine

My alarm is set for 5:30. In the morning. On a Saturday. After a long week of pushing papers, putting Microsoft Excel through its paces, and answering mountains of emails, most people would want to sleep as late as possible. The weekend is the one chance we have to wake up at the crack of noon and get judged by precisely no one. Normal folks around the world agree – sleeping is awesome and necessary.

Despite knowing the societal pressures for rest and that most of us never get enough of it, I made the conscious decision to pick up my phone and set an alarm before bed. And not just any alarm; one that would assure me a wake up time earlier than the sun’s. I refuse to allow that bright-eyed, bushy-tailed bastard beat me.

I have no important plans. I could be doing literally ANYTHING else. Armed with a pair of comforters and enough pillows to please even the pickiest of princesses, my bed is a comfort tour de force. You do not just walk away from this bed. It’s a slumber pick up artist, complete with a giant neck pillow in its pants that is always happy to see you. (My bed also came equipped with terrible pickup lines, thankfully) Sleeping should be how I spend 8-10 hours each day.

And yet here I am, awake and making coffee before most birds and other humans have even toyed with the idea of getting up. I have successfully fended off the advances of both logic and a seductive mattress.

Which sucks. Why would any relatively sane person want to do this to themselves? Sleeping rules and I am forcibly depriving myself of it. I should strive for more rejuvenation in my life. Instead, I wander around my kitchen, eyes weary and encrusted in sleep goo, wondering what sort of thermodynamics allow a linoleum floor in Southern California to slip below 32 degrees Fahrenheit. Early and cold, I am the anti-Nelly.

But I can’t stop.

When I was a teenager just beginning my surfing career, my father, a former surfer himself, told me that the best waves usually arrived first thing in the morning. There was always less wind then and, more importantly, fewer people. Not many folks like to rise that early. Whether it’s due to a seductive Serta Perfect Sleeper or not was unclear.

As most kids do, I brushed the idea off, chalking it up to adult phooey. Physical activity first thing in the morning? No thanks, Old Man. As a teenager, I am legally required to sleep until at least mid-morning so you can proclaim me lazy and question what I am doing with my life.

Later that year when the summer rolled around, so too did the crowds. I soon discovered that the entire tri-state area and their extended families liked coming to the beach midday. These were the types of people that enjoyed wading in the surfing areas, confident that every surfer is just like the ones they see on TV: agile and able to quickly navigate through the tightest of situations. They had not yet been introduced to 16-year old me. Surfing turned into a driver’s ed test as I was forced to clumsily weave between people. 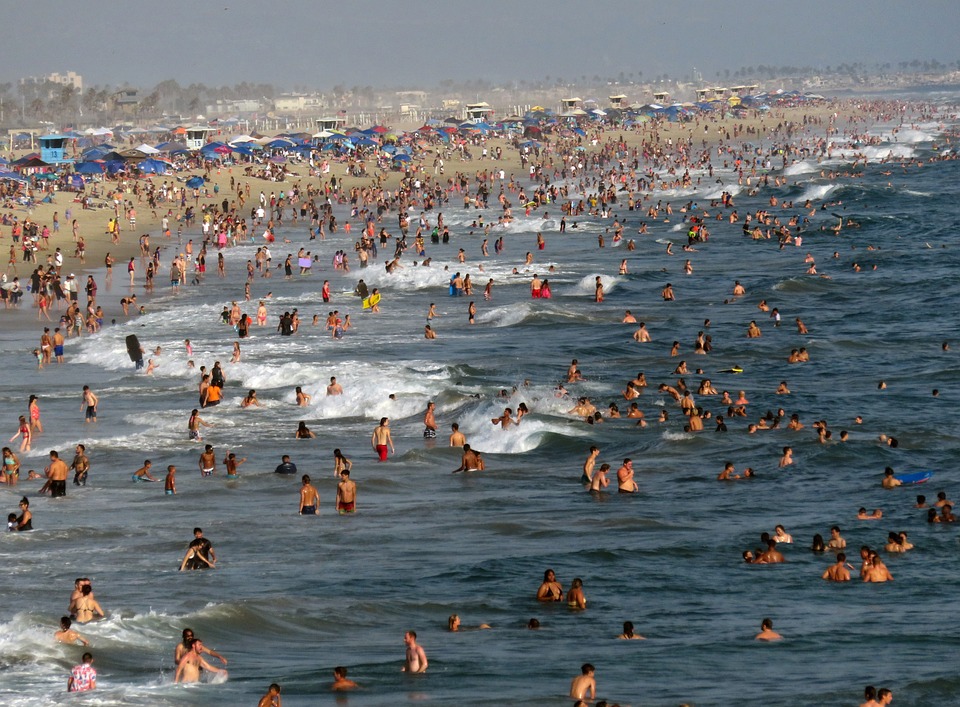 Navigating this is the antithesis of fun

Frustrated and wanting to avoid assault charges, I decided to give my father’s advice a chance.

The next day, I woke up at 6am, gathered my belongings, and trudged out the door.

My father watched me leave. “Where are you going?” he asked, as if there was any other place a kid with a surfboard would be going at that hour.

“Ah, I see,” he said, knowingly. “The wind is blowing offshore today. There might be some surf.”

I desperately wanted him to be wrong, hoping that this would give me the ammunition needed to give me a free pass to sleep late for the rest of my life.

When I arrived at the beach, I wandered over the dune to check the waves and was met with a sight I had never seen before: clean shoulder-high waves, untouched by the wind. And not another human being in sight.

Shit. That son of a bitch was right. The first time you realize that your parents are not actually full of shit, after years of thinking otherwise, is a sobering one. Maybe I should stop staying out so late, study more, and think about what I want to do with the rest of my life.

Up until that point in my life, it was the best session I had ever had. And these were waves unlike any other I encountered previously. The only three things present that morning were myself, the ocean, and all the glassy waves I eat. I was unencumbered by the rest of humanity. It was freeing.

This is what succumbing to addiction looks like. I liked surfing and would occasionally venture into the ocean to have fun, but this was like injecting myself with heroin. Immediately, I fell off the deep end. Once you lose your mind via an experience equal parts serene and thrilling, there is no turning back. It was a feeling I would be chasing for the rest of my life.

Exhausted from lack of sleep and surfing until my arms felt like a worn out Stretch Armstrong, I returned home. My father greeted me, asking how the surf was. “Good,” I told him, not wanting to let on the full extent of the needing to surf now pumping through my veins. He saw me struggle to keep hold of my board under my tired arm and did not need to ask a follow up question. He was right.

So that’s why I am here at this ungodly hour, humming K’s Choice while stuffing my car full of towels and neoprene. Embracing a lifetime of insomnia.

I’m not an addict. Maybe that’s a lie.

I drive to the beach, a lonely journey, save for the few people whose dogs demanded that sleeping in is not an option this morning. But I like the loneliness. I didn’t wake up to go hang out with the rest of the city after all – this was selfish quest with a goal of finding no one. I suddenly realize I have more in common with hermits than I would like to admit.

Every time I arrive at the beach, I always contemplate not going in. I try to make excuses: It will be better later, maybe it will be warmer in another hour, maybe I should go back home for a little bit more sleep – briefly reverting back to my teenage myself, wishing to hide from the reality of the world.

That’s when my wave addled brain, and the caffeine, kick in. “LET’S GOOOOOOO!!!!!!!!” my brain yells at me at a volume that really should not be used at this hour. “You didn’t wake me up with roughly 273 ounces of coffee to sit on the couch.” That guy is an asshole, but he’s right. It’s time to go surf.

As I paddle out, it’s cold. The off shore wind whips chilly desert air over the Pacific, smoothing its surface. It bites at my ears, turning them numb. My years of living in Southern California have softened me. Anything below 50 degrees now feels like the frozen tundra.

A set wave starts to break in front of me. Any sensible human will tell you that, if you are cold, the last thing you want to do is go underwater. I swear, bracing myself for the inevitable numb face and ice cream headache I am about to experience. I duck dive and emerge, still swearing, but this time unable to feel my lips forming the words.

I contemplate getting a new hobby.

Soggy and disgruntled, I make it out to a lineup consisting of myself and some pelicans searching for breakfast. Another set wave appears. I paddle over to the peak without needing to jostle through a dozen other surfers within 20 feet of me to get there. Looking down the line as I get to my feet, all I see is the shoulder, ocean, and sandy beach. Empty and untouched.

After riding one clean wave after another, I feel fucking fantastic. I am the king of the ocean. While fame and fortune will never come my way, right now feels like I am being showered in jewels. No amount of money or possessions hold a candle to these moments. Like Scrooge McDuck, I catapult myself back into my pool of gold coins.

For a brief juncture, the waves are solely mine to enjoy. Others will start to fill in as the morning wears on, but for now, my mind and body are left alone with the ocean.

Oh yeah, that’s why I do this. I’ll put off getting a new hobby for another day.

As the saying goes: the early bird shreds the most gnar. And besides: It’s cool. I feel alive.

This email address is being protected from spambots. You need JavaScript enabled to view it. is a writer, surfer, and burrito enthusiast. You can find more of his work at The Gnar Shreds You.