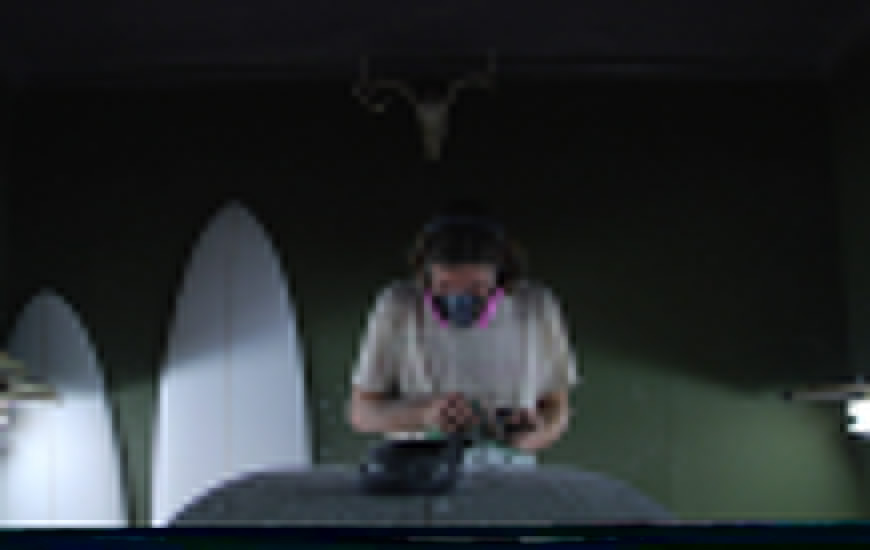 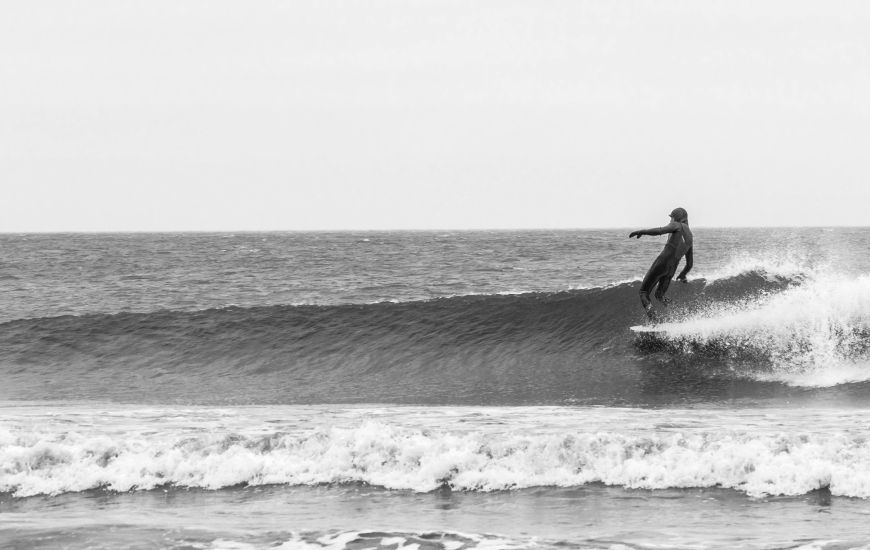 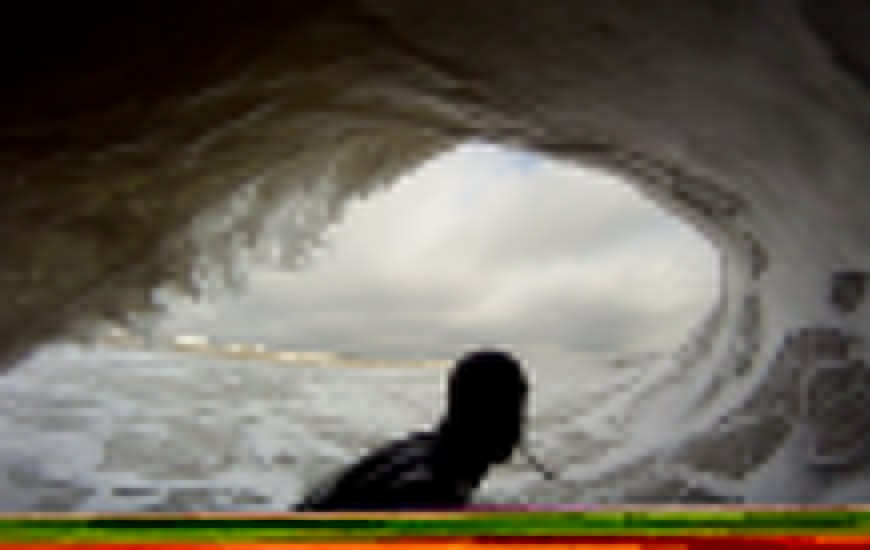 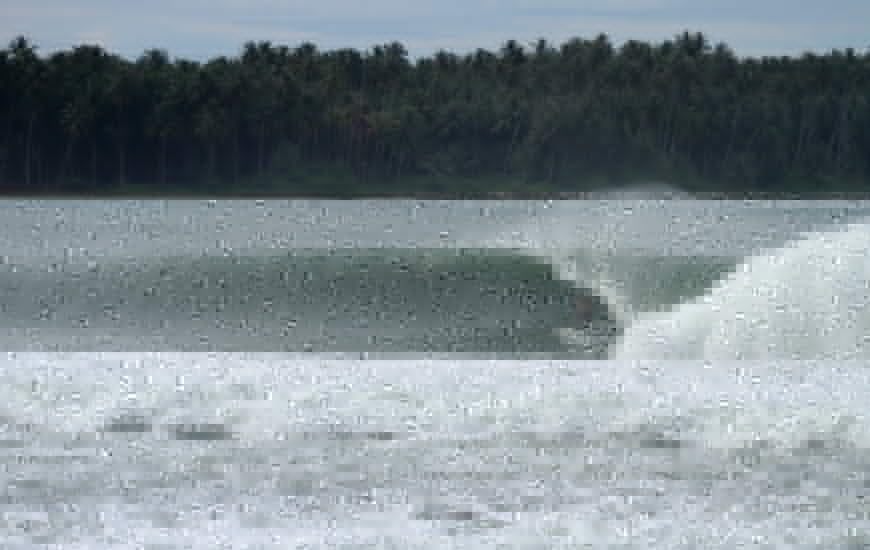 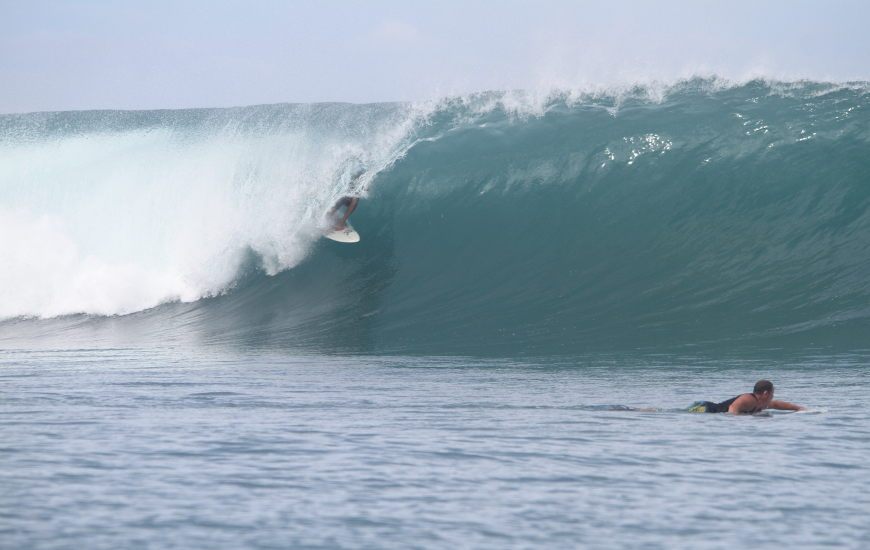 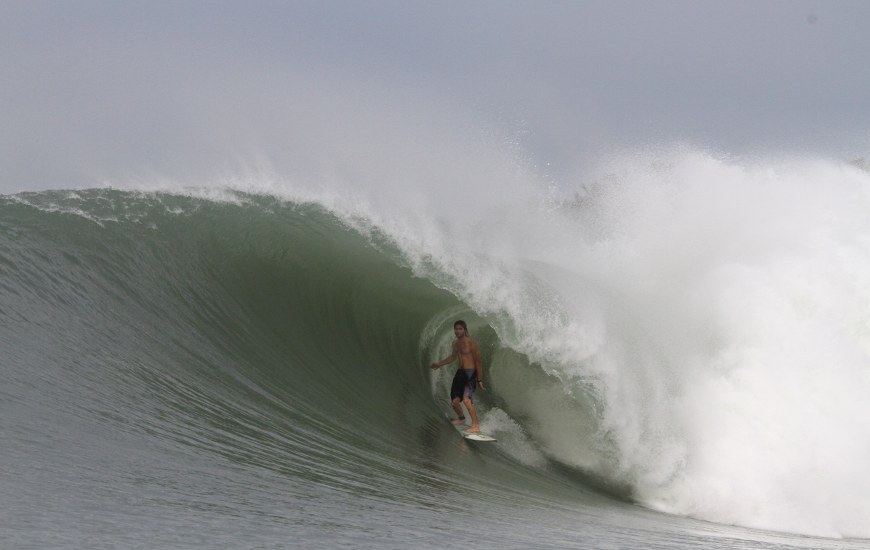 In early September, I had a super fun session at a firing A-frame in Central Jersey, trading waves with a cool guy named Nikko. It was just the two of us and we quickly fell into an easy conversation about surfing, jobs, trips etc. I couldn’t help but notice the board Nikko was riding and from the nose, thought it was a single-fin, given its classic lines. When I asked, his eyes got big and he said, ‘no, no, no, check this out’, slid off, flipped it over and ran his hands along this funky asymmetrical tail. ‘Woah’ was all I could muster. I’d seen them before and was a big fan of Carl Ekstrom (legendary shaper who is the asymmetrical king), but this board was just beautiful. Nikko went into the design and how the shaper– NJ’s own D. Cal (Dan Callaghan)–had made it specifically for him. It wasn’t Nikko’s first from the shaper and he was clearly stoked on the design. I decided then and there to reach out to Dan himself.

When Callaghan and I connected, I found him to be a soft-spoken, humble guy that understood shaping from an engineer’s perspective (degree from URI). He was a self-described DIY’er like his dad and I got the feeling that he could build anything, only ever needing a spool of yarn, some tape and a thimble.

But then I Googled his name and stumbled on footage of Dan charging Nias (Indonesia) like a champ. My jaw dropped as he casually freefell into 10 ft bombs and massive barrels. The footage was mindblowing and I wondered if it was hard for him to walk around with such a huge set of nuts. When I pressed him about it, he shrugged the session off with a laugh and a ‘yeah, that was a memorable trip.’ If it was me, you’d all never hear the end of how insane I was at Nias, but for Dan, it was just a ‘good time’.

His engineering, love of building stuff and abilities in the water make Dan a shaper with whom you should talk. My gut is he’ll do right by you and if you want to get on something funky, he’ll figure that out too.

See below for my conversation and enjoy the pics and video.

TSV: So, Dan, where are you based?

DCal: My shop’s in Galloway, NJ, but I live in Ocean City, NJ.

TSV: How long have you been shaping?

DCal: I guess about 6 years now.

TSV: Do you have your own shop?

DCal: No, I have a shed that I do all my shaping from. I built it around 2008 and then retrofitted it for the shaping, glassing, everything. Though I don’t do all of my glassing now because it took so much of my time.

TSV: So, how did you get into shaping?

DCal: A lot of different things got me to do it. I used to watch This Old House and Home Improvement and I grew up building stuff with my dad. He’s always building stuff…always building things and fixing things, instead of buying things. I grew up on DIY and I think the initial trigger was when I saw Jon Wegener riding and making an alaia and I thought ‘man, I really want to try that’ but I had no idea how to get them and I don’t think there was any way to get them unless you had a connection to Jon at the time. So, I started researching different kinds of wood that’d work in the ocean and do what I wanted it to do and shaped an alaia and had a blast. I used it on the pointbreaks that I surfed up in Rhode Island and it was awesome. So, the next step was to make a regular board and it went from there. I was getting boards from friends that’d snap in half and I’d be like ‘oh this is gold if I just put it back together’. It was an easy transition for me to shape.

TSV: So, how did you get into the asymmetricals?

DCal: The first influence was early rumblings of Ryan Birch and that triggered it. And I’ve just always liked things that are different and have always gotten bored w/ things that were standard. I saw the asymmetricals and instantly thought they made a lot of sense. I know people have different opinions about asymmetricals, but they do make sense not so much from a backside vs frontside standpoint, but more from a heel side vs toe side perspective. Your limbs pivot differently depending on heel vs toe side. Plus, I like the idea of new territory, whether it’s for better surfing or just to have more fun. For me, I grew up on high performance shortboarding like everyone else. But as I got older I started wondering why I shortboarded when there were all these other boards that could be fun.

TSV: Are you shaping for particular surfers or are you just trying different designs for fun?

DCal: Well, I do custom, but sometimes I just build things for myself and what I want to do. But typically, asymmetricals are custom. You really have to tune into somebody to build them. I dive into everything about the person that I can. But they’re fun to make and ride.

TSV: So, are you the asymmetrical guy in NJ?

DCal: I’m really open to everything and not closed to any design. I don’t specifically do asymmetricals.

TSV: Have you looked into Carl Ekstrom at all?

DCal: Oh yeah. I’m definitely into the history of surfboard design. But I also like to do my own trial and error for my own spin on things to understand it.

TSV: So, the Nias footage. Jeezus! That was soooo heavy.

DCal: Yeah, that was a memorable trip for me. Right at the top.

TSV: I was actually going to start off the interview asking if your giant balls ever got in the way of shaping.

TSV: How much do you travel to places like that?

DCal: Not as much in the last few years just because…well…I’m having a baby now and that’s keeping me more grounded. But I was doing a lot of it for about 3 years straight. I spent about 5 months out of the country each year and I’m lucky and blessed to be able to have done that. But I did two months at a time at Nias two years in a row and we also traveled around Sumatra, the Mentawais, camping in the jungle to get certain waves and all. We never posted up at one spot, per say, but we’d try to strategically strike every spot and get it the best we could. The first year we scored in the Mentawais and the second year we scored at Nias.

TSV: Those drops at Nias were just unreal.

DCal: Yeah, I wish I could go back. That’s a good wave. I had some rough ones there though. My buddy popped a blood vessel in his lungs there. Coughing up blood and everything.

TSV: And you don’t want to do that in Nias.

DCal: No, we were freaking out. We found this Australian guy who was a doctor and he assessed him and said if you do this and that you’ll be alright, so he took it easy for about a week. It was scary. When we went to these spots we tried to have everything we needed, like we even learned how to stitch each other up.

DCal: Yeah. We used to get antibiotics from our doctors just in case because we knew one of us was probably going to get staph from reef cuts or whatever. But I had so much fun planning for that stuff, you know?

TSV: So are you a cold water guy at all?

DCal: I’m not opposed to it. I’ve done a lot of New England and went to school in Rhode Island, so yeah. And I just bought a camper and I plan to explore more on the East Coast and into Canada.

TSV: With baby and wife in tow?

DCal: Yeah, exactly. We both agree that we want to travel with the baby and not be too scared to go on trips etc.

TSV: Oh yeah, you can do it. So, what shops are your boards in now?

DCal: I’m in 7th Street Surf Shop in Ocean City and Glide in Asbury Park and I do custom orders.

TSV: And when you’re not shaping, what are you doing.

DCal: I’m an engineer for the electric company. I got my engineering degree. I balance both jobs and it’s a long week, but for me the engineering helps with the way my mind works and it helps with my shaping too.

DCal: Alright, man. Thank you. It was nice talking with you and I look forward to talking to you in the future.