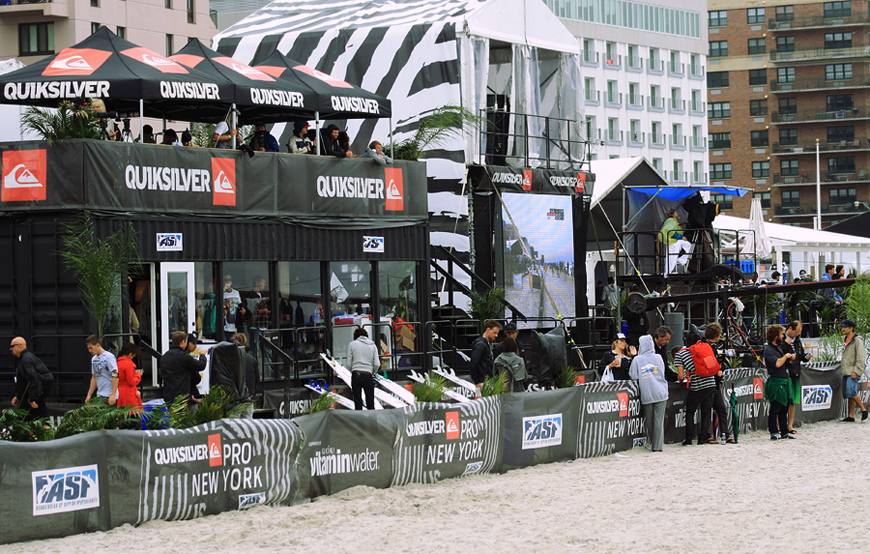 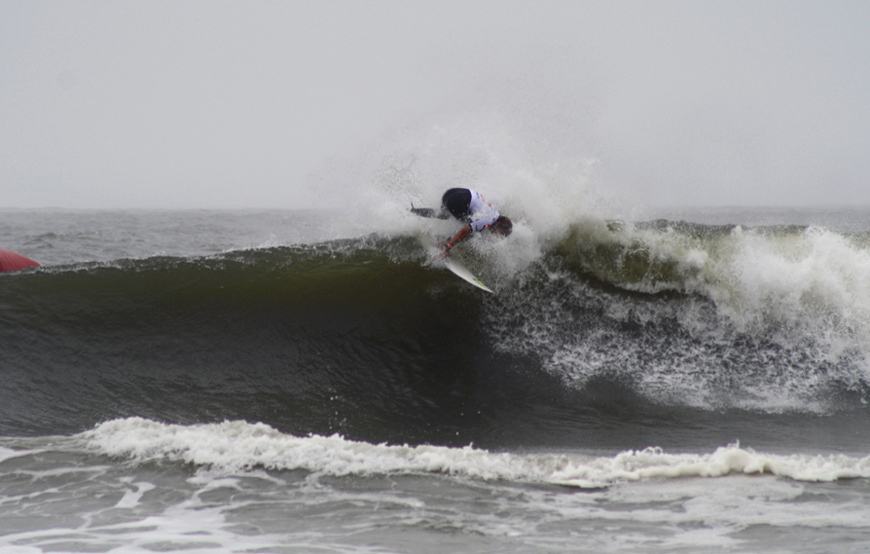 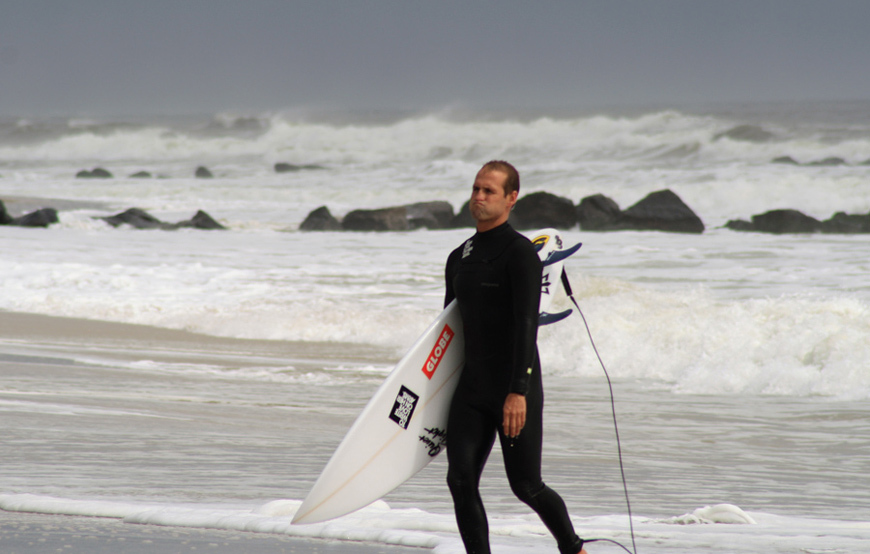 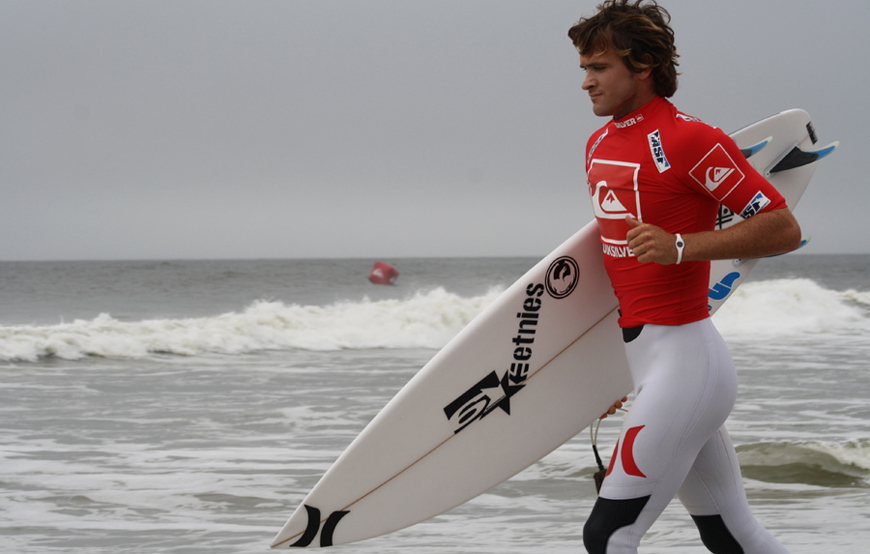 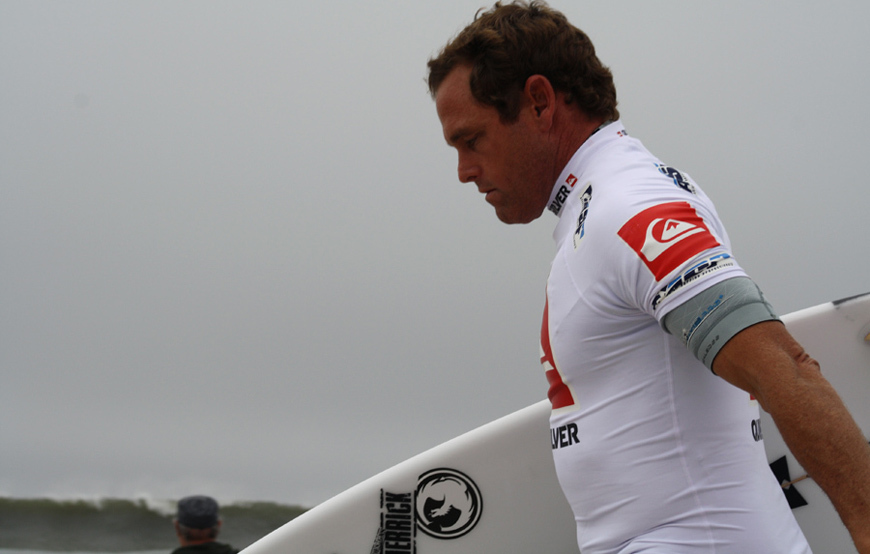 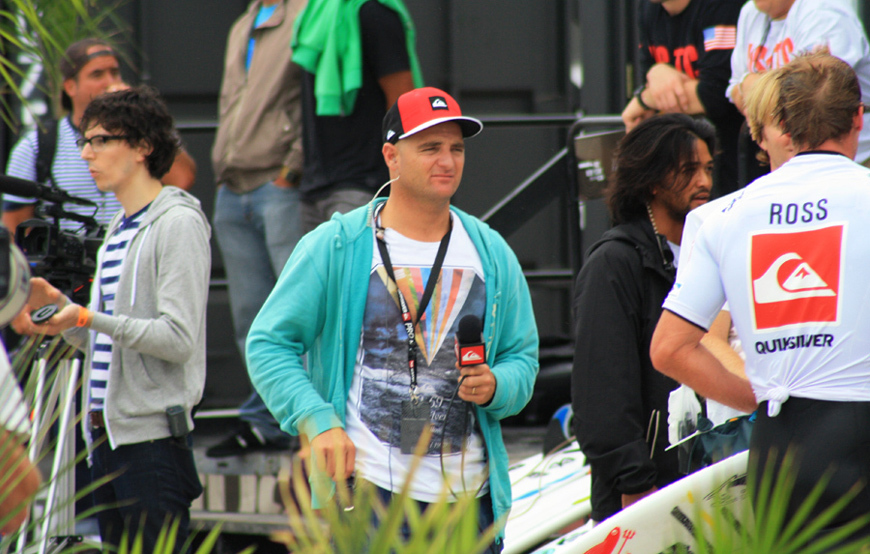 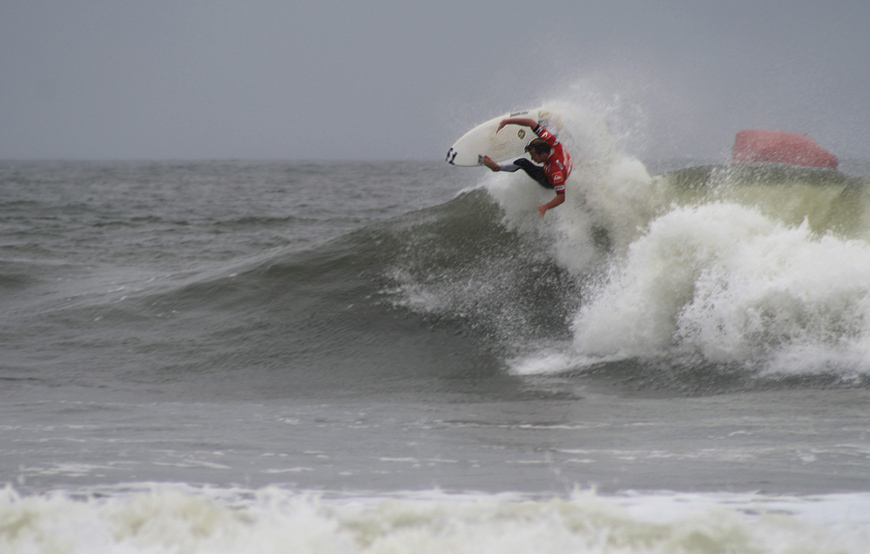 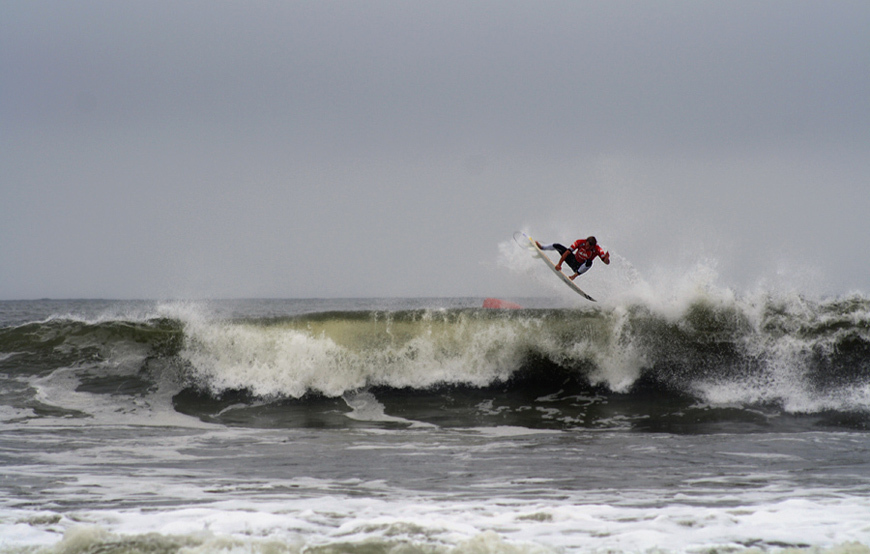 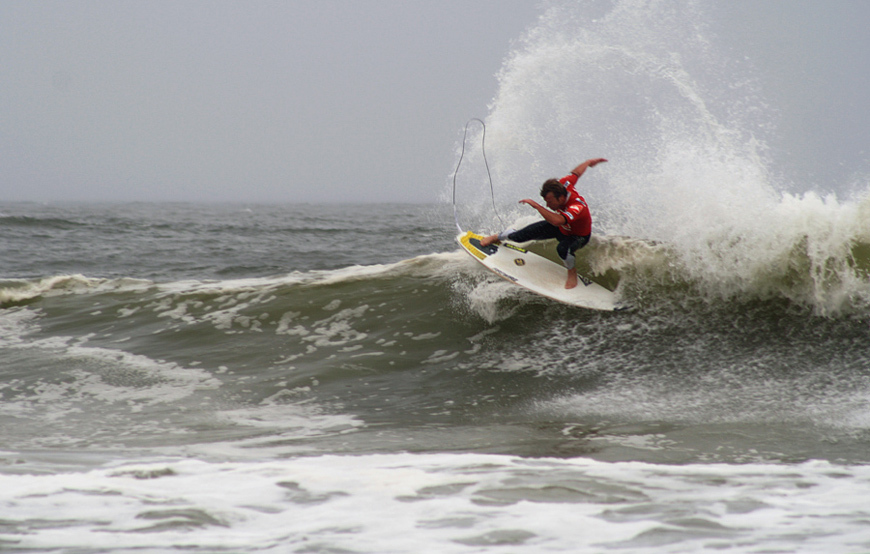 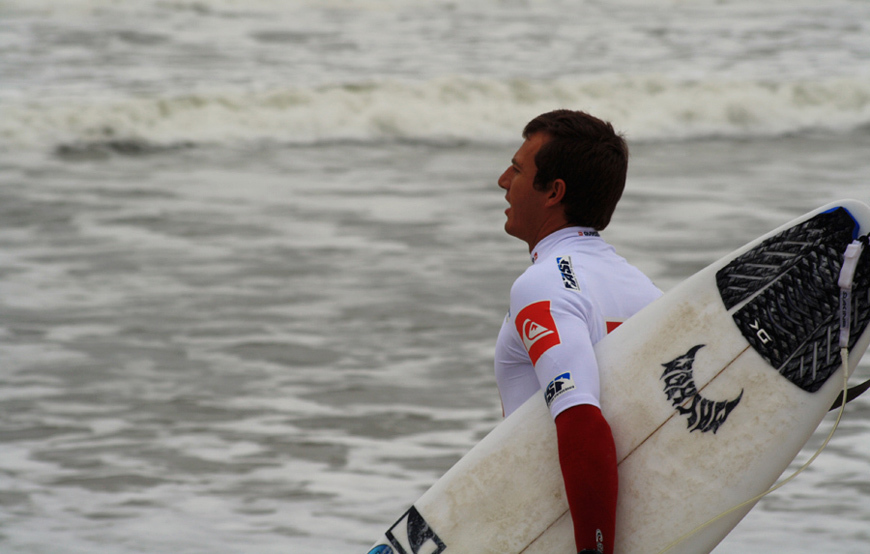 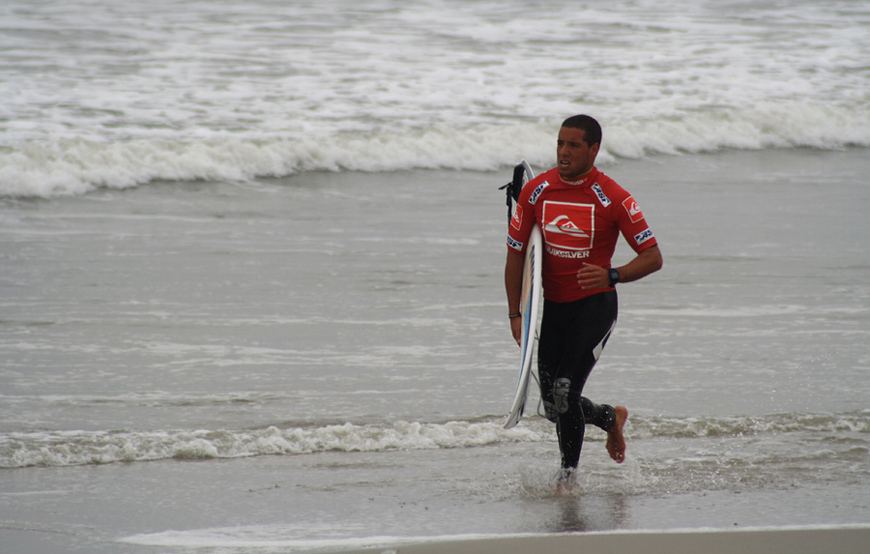 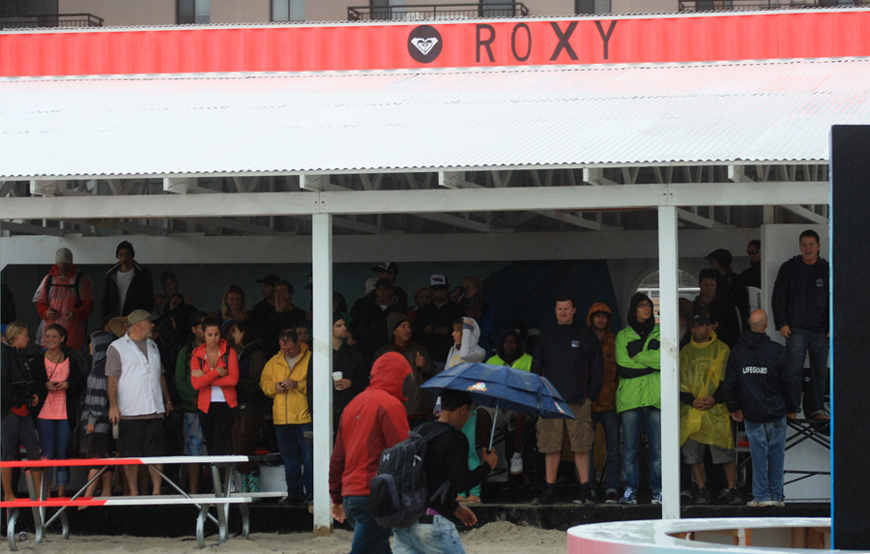 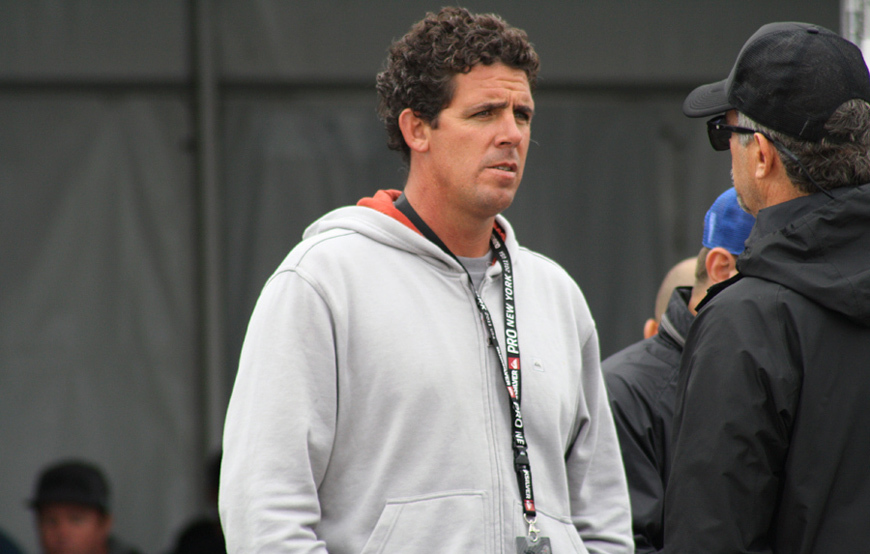 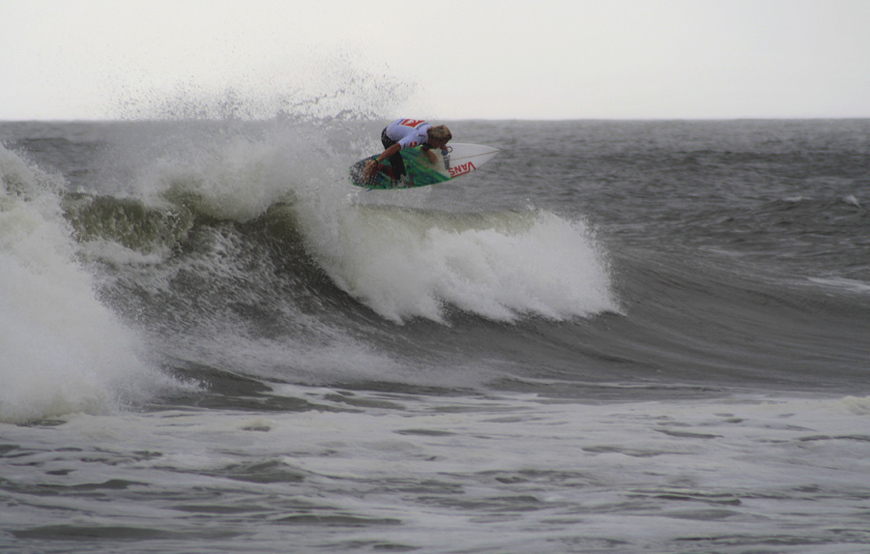 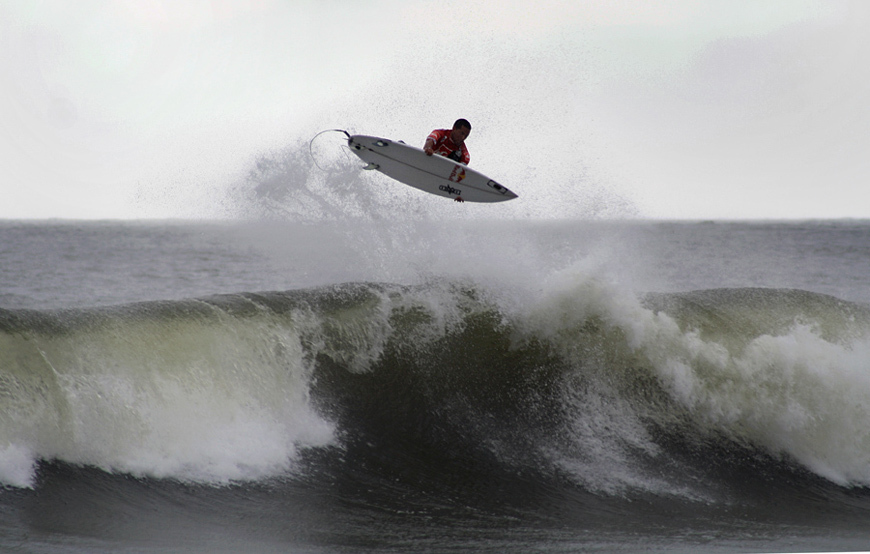 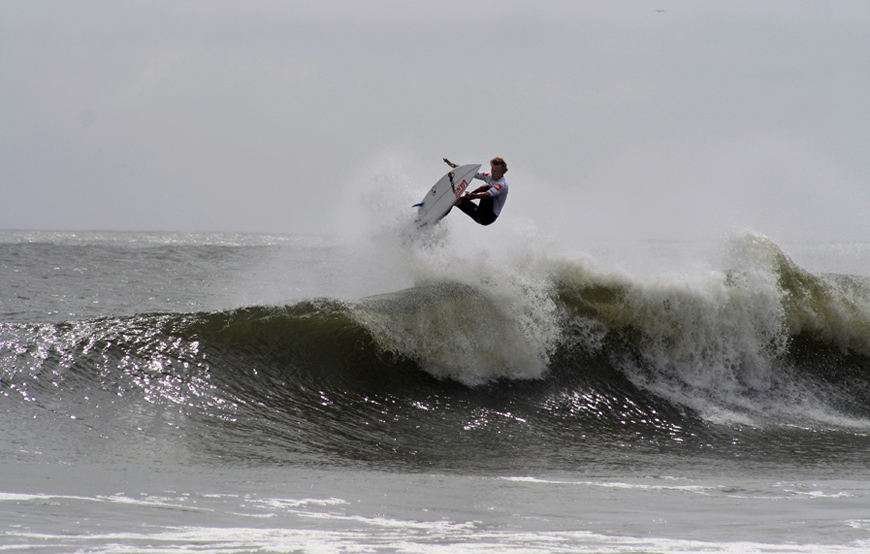 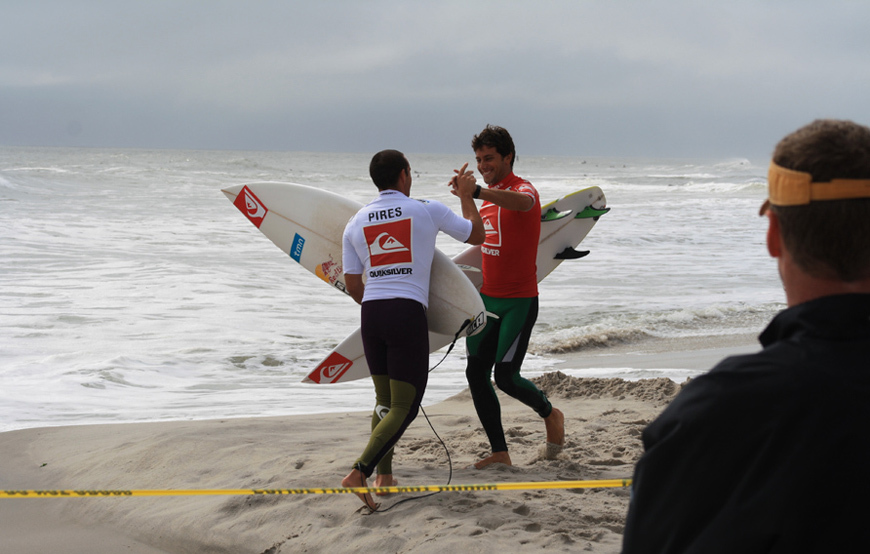 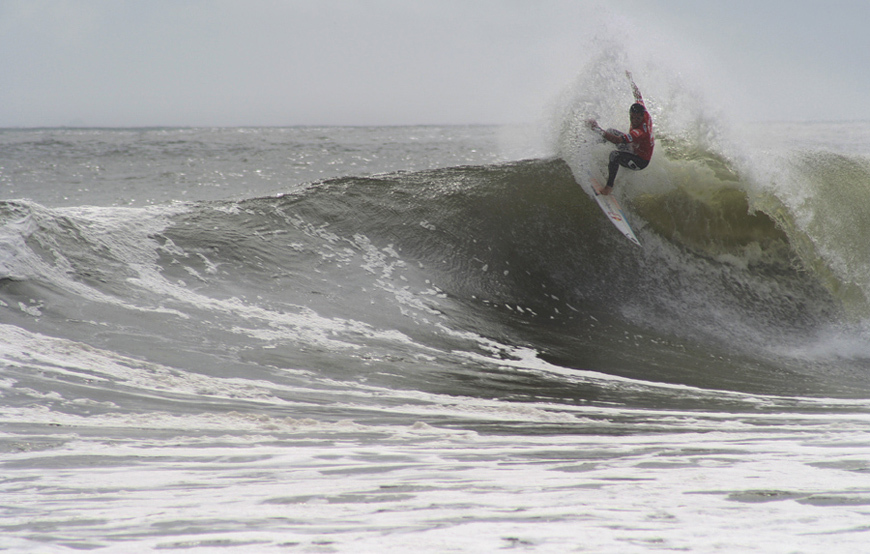 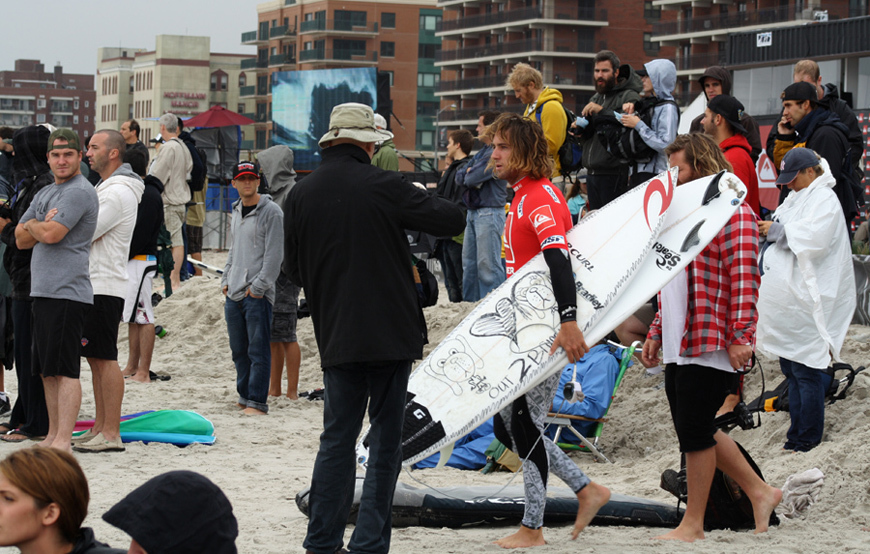 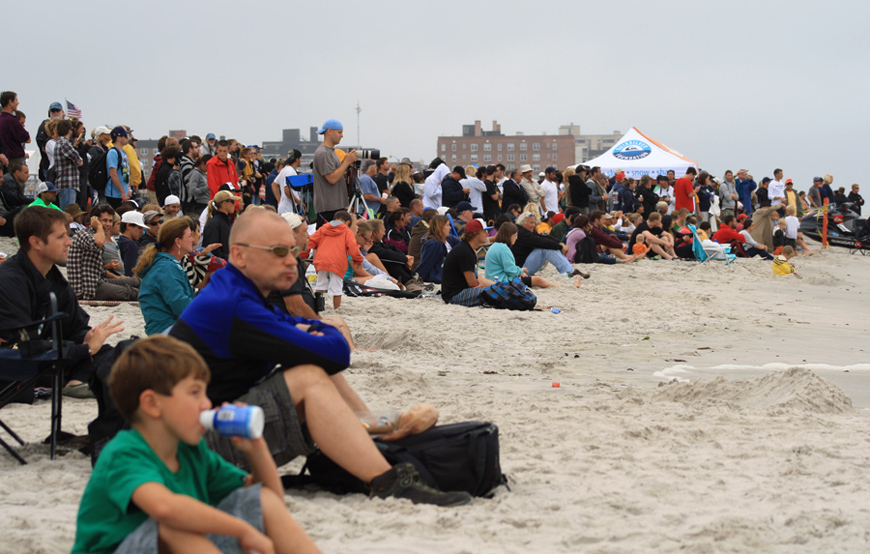 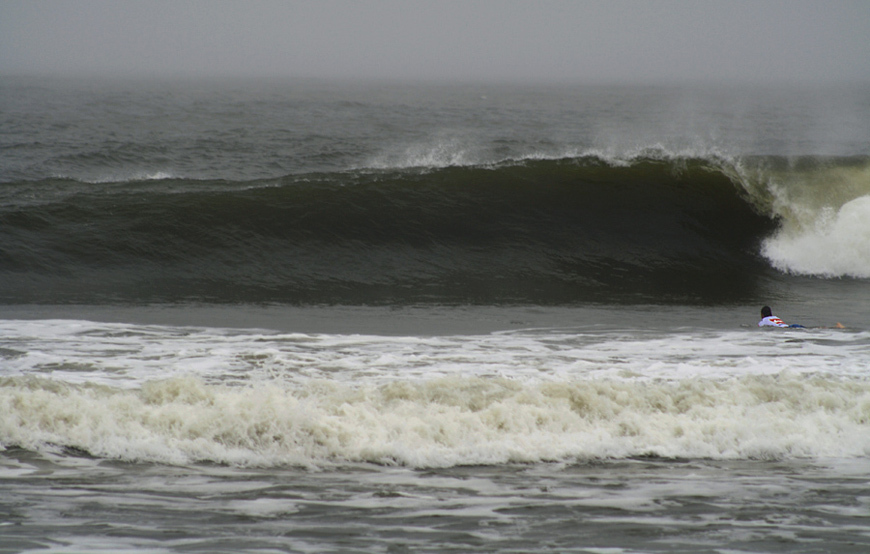 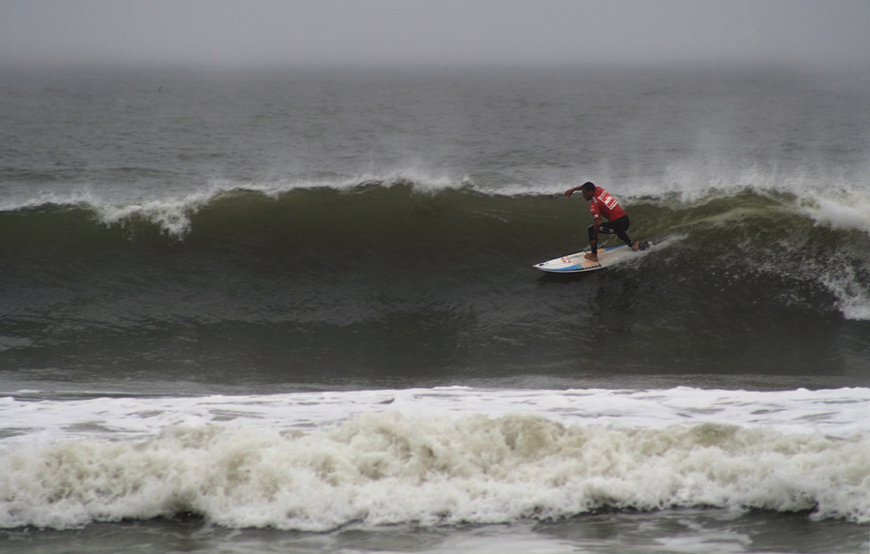 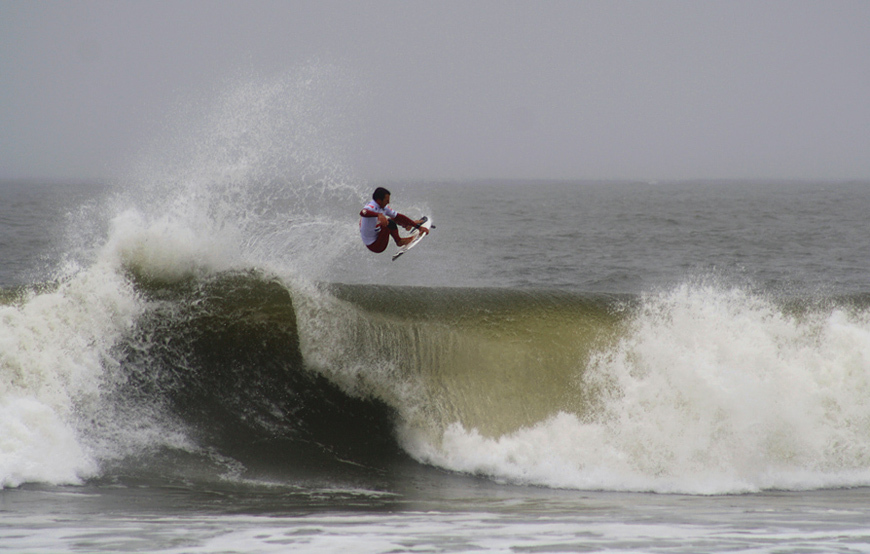 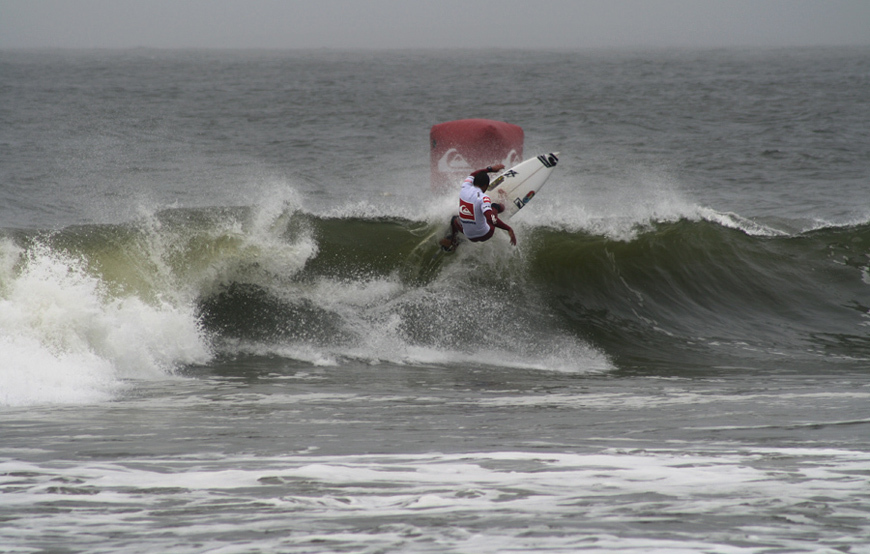 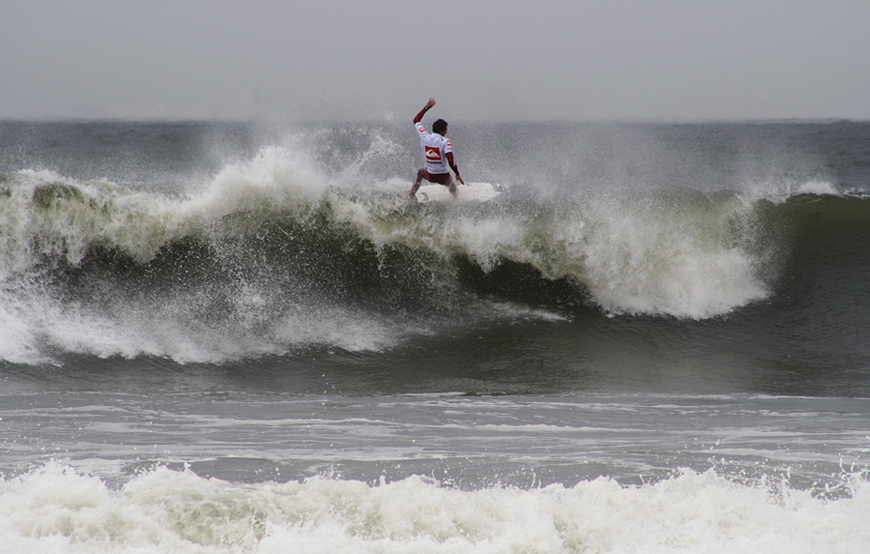 The Quiksilver Pro New York supported by vitamin water continued for the second consecutive day at Long Beach in Long Island, New York and saw the completion of Round 2 as well as the first four heats of Round 3.

The domination of high seeds today brought an end to the run of New York hometown hero Balaram Stack, 20, who has drawn massive crowds each day of competition. He lost to Australia’s Mick Fanning in Round 2 early this-morning.

Stop No. 6 of 11 on the ASP World Title Series, the Quiksilver Pro New York marks the final event before the mid-year rotation and offers up the richest prize purse in surfing history of US$1,000,000. Hurricane Katia continued to deliver increasing surf of up to six feet (2 meters) throughout the day, with higher surf forecast for tomorrow.
v Adriano de Souza (BRA), 24, current No. 4 on the ASP World Title Series, vigorously attacked the Long Beach lefthanders on his backhand and belted the day’s highest single-wave score of 9.20 while netting the top heat-total of 17.93 (out of 20), in Round 2 before taking his Round 3 heat.

“I’m really happy with my performance today,” De Souza said. “My first heat was better for sure, I got the 9 and the 8, but I tried to get in rhythm in Round 3 and I hope I can keep going and get a good result in here. My house is really similar to these waves in New York and I feel at home out in these conditions.”

De Souza, who defeated Travis Logie (ZAF), 33, in Round 2 before topping Patrick Gudauskas (USA), 25, in Round 3, kept his ASP World Title campaign alive with today’s effort and is hunting a strong result in New York to regain the No. 1 position on the ASP World Title Rankings.

“I’m stoked to make my heats today,” De Souza said. “We had tough conditions and I knew for me that if I fell in that heat I would be out of the World Title Race. I’m happy to make it and hope I can keep my rhythm for the rest of the event. I’m looking forward to the no-loser’s Round 4 and hopefully I can keep going in this event.”

Taj Burrow (AUS), 32, put on an amazing aerial performance on his forehand in Round 3 compliments of the side-shore winds blowing into the Long Beach right-handers and lofted a 17.10 heat-total while eliminating Adam Melling (AUS), 26, from competition.

“It’s pretty good out there,” Burrow said. “Us natural footers that like to do airs rub our hands together when wind’s like that. I did that big alley-oop on that first wave and I stacked it, but when I was through air I felt the board sticking to my feet. I knew that heat was going to be fun. I wasn’t aware of his (Adam Melling’s) position on the rankings, but I’m thinking about the money. I’m trying not to, but it’s there in the back of my head.”

Melling, current No. 35 on the ASP World Ranking, will not make the mid-year rotation for Trestles, but could possibly appear as an alternate in the remainder of the ASP World Title events.

Mick Fanning (AUS), 30, two-time ASP World Champion, rebounded after a Round 1 loss yesterday, making a change in his equipment to dispatch of dangerous local wildcard Balaram Stack (USA), 20, with a dominant performance.

“It’s always hard when you lose that first round, you’ve got to go back and pick up the pieces and go again,” Fanning said. “Wildcards are difficult because they’re usually locals and they know spot. I tried to get moving early and keep moving. The tide was dropping out and I just tried to get them in early. My board yesterday wasn’t working to well, so I went back to my normal shortboard that I’ve been riding all year.”

Brett Simpson (USA), 26, got the best of a series of exchanges over ASP Dream Tour veteran Taylor Knox (USA), 40, in their Round 2 match-up. Knox, current No. 30 on the ASP World Ranking, will wait on the results of the surfers ranked behind him who are still alive in the Quiksilver Pro New York to see if he maintains his position among the ASP Top 34 entering Trestles.

“We all knew coming into this event that Taylor (Knox) needed to do something and I am coming off momentum from Teahupo’o,” Simpson said. “He’s been a mentor and friend since I started on tour last year. He’s inspired all of us. It’s just the way it goes. I was anxious. I knew there was a lot on the line for him and I want to climb the rankings too.”

Simpson will face off against ASP Dream Tour rookie Julian Wilson (AUS), 22, in Round 3.

Jeremy Flores (FRA), 23, who was a standout at Teahupo’o, maintained his form in the beachbreak conditions on offer at the Quiksilver Pro New York, eliminating fellow European and close friend Tiago Pires (PRT), 31, in a hard-fought Round 3 battle.

“I didn’t like surfing against Tiago, I want him on tour,” Flores said. “He’s my friend, but I want to do well here, I want to make heats, but I wanted to see him do well here because I knew he needed a result. I couldn’t find any really good waves. The guys in the heats before had fun waves with great walls and mine were fat or wide. I guess my wave choice was bad, but I made it.”

Bobby Martinez (USA), 29, was disqualified from the event due to an unprofessional outburst after winning his Round 2 heat. Martinez would have met world No.1 Kelly Slater in Round 3. Slater now advances directly to Round 4. Further details are available at www.aspworldtour.com .

Event organizers will reconvene tomorrow at 6:30am to assess conditions for a possible 7:30am start.

Highlights from the Quiksilver Pro New York will be available via http://www.quiksilverpro.com