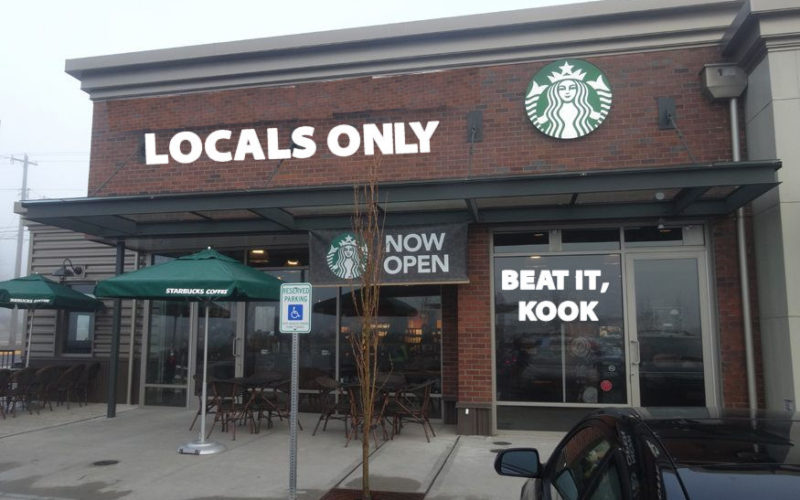 This place has a heavy local vibe

The Scene: A Starbucks at 7 AM. The sun has just risen. Desk jockeys are lined up, staring with absent minds at the menu of options behind the counter. A pointless endeavor, since they already decided on their drive over what they will be ordering: the same coffee they get every day.

There is someone new in Starbucks. Usually, this new guy frequents other coffee shops – maybe a local joint, a different chain, or a Burger King. The point is they are an experienced coffee drinker and this is their first time in this particular Starbucks.

The line is filled with locals who come here every day. They immediately notice the new guy. He has politely entered the queue, ruffling no feathers on the way in. Just another guy in the line up to the register.

This does not sit well with some. The most aggro of this shop’s coffee bros approaches him. Judging by his age and haircut, he is most likely named Chet.

Aggro Caffeine Bro (maybe Chet?): Hey, New Guy, beat it! This is a locals only Starbucks!

New Guy: What? I am a coffee feign just like the rest of you. Why do I not have a place in this establishment?

Aggro Caffeine Bro (who sure looks like a Chet): Because this is OUR Starbucks. I’ve been drinking coffee here for 25 years, way before your sorry ass showed up. And my family has been ordering lattes at this spot for decades before that. You can’t just come in here out of nowhere and disrespect my family like that!

New Guy: That’s ridiculous. I drove here from my house on the other side of the freeway. It’s maybe 5 minutes away. All I want is a cup of coffee like everyone else. I refuse to give in to your absurd request.

*Aggro Caffeine Bro gets in New Guy’s face, shoving him into the pastry case. A croissant shakes with fear, muttering something in French under its breath*

Aggro Caffeine Bro (Okay, he’s definitely named Chet): This is MY Starbucks. Get out of here bro, before I slash your tires and your face!  Go back to the other side of the freeway where you belong. This is an advanced coffee drinking spot, and there is no room for a caffeine kook like you here. LOCALS ONLY.

In unison, Aggro Caffeine Bro’s bros (who are most likely named Mitch, Jimmy, and, oddly, Sebastian) begin yelling and aggressively sloshing their coffee around in the general direction of New Guy – a clear signal that he should leave, lest he want to endure the mild discomfort of a first-degree burn. 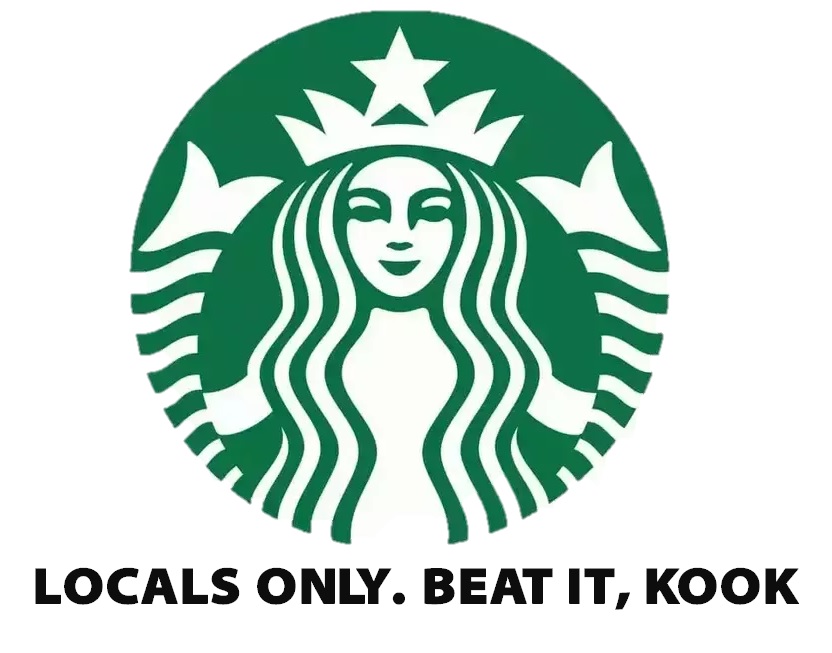 In case you haven’t already come to this conclusion: this is the epitome of inane conversations. No sane adult is trying to start a fight in a coffee shop, no matter what level of bro they’ve ascended to. (Cars, however, should not be trusted) Actual shop owner aside, no one can claim a particular coffee establishment to be exclusively theirs. And they sure as hell can’t ban others from trying to enjoy it. During operating business hours, it serves as a public space for anyone to come in, pay for copious amounts of caffeine (potentially costing copious amounts of money), and enjoy the benefits of their shitty free WIFI.

Yet, this is a daily occurrence at beaches all over the world. Localism is real. If every surf break had a nice display of novelty coffee mugs for sale, they would have long been shattered multiple times over from angry locals duking it out over who is the MOST LOCAL and has the greatest right to surf there.

Localism, for the uninitiated, is displaying hostility towards other surfers in an attempt to dissuade said others from entering the water or taking waves. Imagine if an angry Canadian Goose (the most vicious of all birds) mated with your average suburban WalMart customer, and this imaginary Goostomer was extremely territorial. Now give them a surfboard and an area to defend. It’s only a matter of time before the surrounding population starts getting their eyeballs pecked out the moment they set foot on the beach.

Hot surf take incoming, so make sure you break out your flame retardant flannel shirt: No one cares a single iota how long you’ve been surfing a break, where you grew up, or the amount of time you have been out in the water. Zero people. If your self-important surf resume was undergoing surgery at a hospital, it would be flatlined. Dead. Finished. Nonexistent. It matters about as much as standing on a piece of grass and announcing to everyone that passes by “THIS IS MY GRASS BECAUSE I HAVE STOOD HERE SINCE 1976!” This isn’t Oklahoma in 1889. You can’t just stand somewhere for a long time and expect it to mean anything of importance.

Do you know what they call people that stay in one place their entire lives and never experience what it’s like living somewhere different? Losers.

And yet, in 2019, standing on blades of grass for an excessive amount of time, or standing on them better than others for longer, means everything within certain circles of the surfing community. I have witnessed countless older gentlemen on boards long and short take-off on every wave that comes their way, dropping in on and cutting off whatever man, woman, or child is in their general vicinity.  If there was a dog surfing contest going on, I guarantee you they would go out of their way to cut Sparky off on his sick ride, just to make sure his local stank is spread over multiple species. All for the sake of establishing dominance. This variety of local is nothing more than an overambitious traffic cop with a decent cutback.

Yelling, board launching, fighting, name dropping, tire slashing, window waxing, and other middle school antics usually accompany localism.  Every action is a conscious step towards a brawl on the sand. And that is exactly the point: to intimidate the new person into never coming back. It’s like every uber local surfer idolizes the wrong Swayze movie: Roadhouse instead of Point Break. 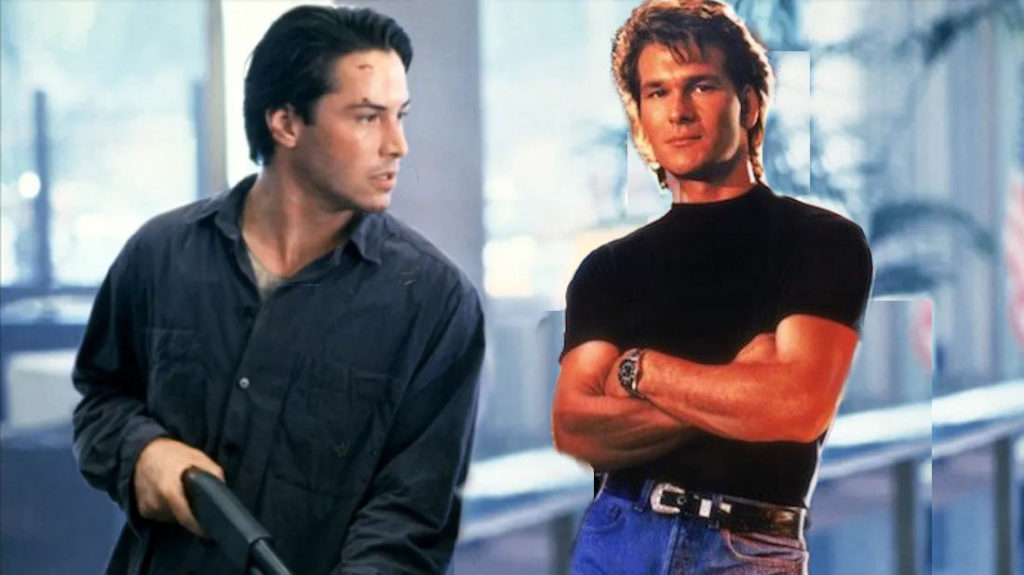 The arguments are the same wherever you go. Billy The Local has spent X amount of time surfing at X break, so therefore there is no room for you who has only been here for X amount of time or surfed X amount of years or lives in X place. The logic is extremely flawed: this would mean that only people that were born at the beach are allowed to surf and only surf that one particular break. What if I grew up at a beach 5 minutes down the road? Or in another state or country? What sort of elitist, country club bullshit is this?

You are not special. You do not have some pre-ordained right to this beach. You are just a hulking, wave hogging, narrow-minded scrotum factory that takes pleasure in slapping your thousand-year-old dick on the table just so everyone can admire how many fucking rings you’ve attained since circumcision. Despite the ocean supposedly being a place that is open and welcoming to everyone, many a shoreline has seemingly been decided by some manifest destiny existing solely within the minds of this handful of selfish individuals.

Now, if a person wanders into a break they have never been to before and starts cutting people off left and right, that needs to be corrected. This can be done by pointing out the errors someone just made and explaining what they did wrong or, in extreme situations, dropping in on them a few times to get your point across. It is definitely important to enforce being respectful to one another. But to bring machismo into it and threaten someone in the water with physical harm is never the right answer. It is and always has been pathetic.

If anyone on the North Shore of Hawaii is reading this, I am sure they already put my name on every available hit list. A Hawaiian assassin has already boarded a plane and is heading my way. Mahalo, my ass.

On the one hand, I understand where the Chets of the world are coming from. They are expressing frustration. Overcrowding is a problem at a lot of breaks around the world, thanks to surfing seeing a massive boom in exposure and popularity over the last 25+ years. It must be frustrating to see a wave you used to surf with 6 or 7 other people explode into a place that now hundreds know about and use daily. I myself have frequent thoughts of loading entire surf schools into a cannon to fire them off into the sun. Hell, I moved across the country and parked myself in an already overcrowded San Diego lineup. I am part of the problem!

On the other, starting a fight in the ocean with anything other than a shark is just as lame as cold-cocking some guy in a Starbucks.

Maybe I am looking at this the wrong way. Maybe I should start acting more aggressive towards others in public, shoving college students out of the way to get my coffee before them. After all, I was enjoying a crippling caffeine addiction while they were still trying to memorize multiplication tables. I am an adult! A MAN! I have important man things to do! Yeah, you know what? Maybe I will start punching random strangers in the face so I can get my venti cup of cheer 10 seconds quicker. Fuck them! They don’t deserve to share the same rustic wood grain coffee art space with me! I am elite! I am ALL FUCKING MIGHTY!

I know localism is not something that’s going away. It is a well engrained part of surfing’s dark innards. Even I sometimes think “who the hell is THIS jamoke?” when someone new paddles into the lineup. Surfers can be dicks. But every time I hear one surfer angrily ask the other “Do you want to take this to the beach?” it sounds just as nonsensical as asking the investment banker in line behind you if he wants to meet you out on the patio for a pastry duel. (Side Note – all surf arguments would be vastly improved and morally justifiable if they were fought with pastries.)

Just wait in line. Be patient with others. You will be fine. The scene will be fine. Your street cred will be fine. And you should be getting more waves than the next person anyway, since you’re the local that knows the wave the best. Your cup of coffee will still be there for you, just as piping hot as the next guy's.

Or be a miserable dick for the rest of your life that only finds joy from intimidating others. If that sounds like a fantastic way to live to you, then I hope you get slowly devoured by a swarm of rabid pirahanas during the best swell of the summer.

This email address is being protected from spambots. You need JavaScript enabled to view it. is a writer, surfer, and burrito enthusiast. You can find more of his work at The Gnar Shreds You.