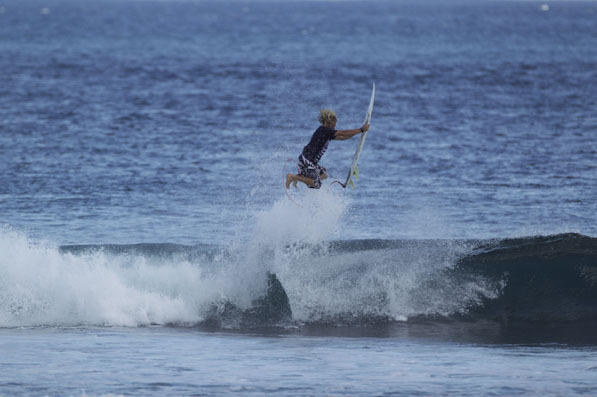 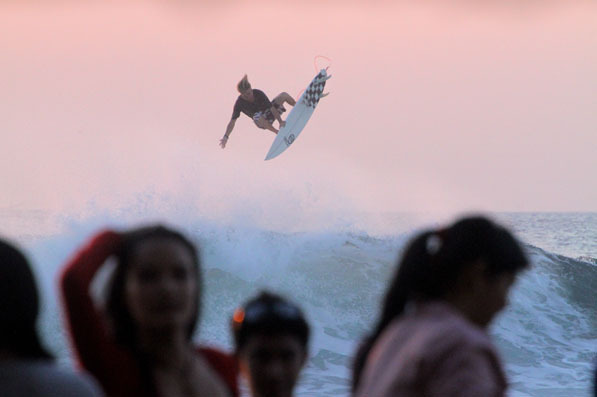 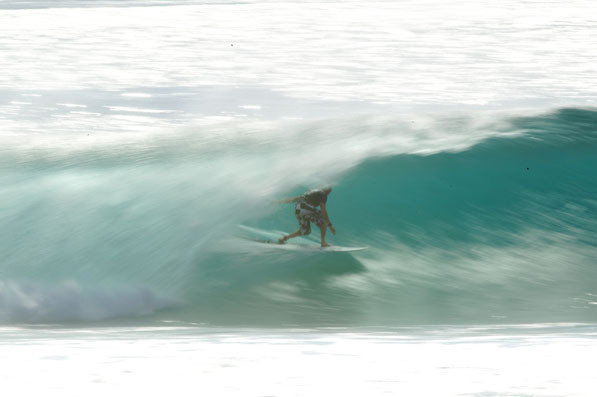 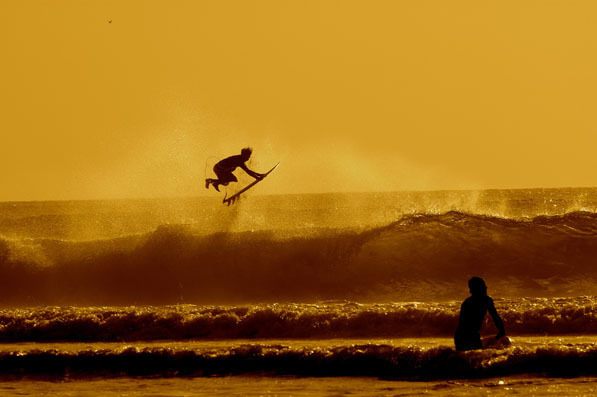 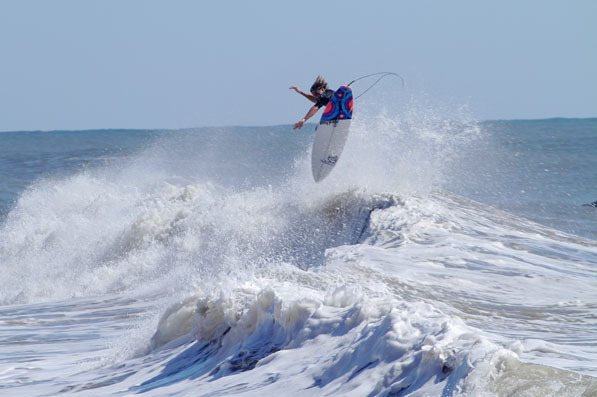 I’ve had the fortunate job of interviewing Leif twice in the past few months. First for his earned spot in the WCT Quiksilver Pro NY contest and then for his Top 10 clip in the fall round of Taylor Steele’s Innersection film (A slew of submitted clips are whittled down via internet voting to a final Top 5, which all make it into the main DVD. When we spoke, we were still just a few days away from the final selection). The words that immediately pop into my head to describe Leif are ‘Gracious’, ‘Humble’, ‘Fun’, ‘Good-Hearted’ and ‘Thankful’. Despite ridiculous talent and a work ethic that shines through smooth air transitions and deep barrel riding, he seems almost uncomfortable with compliments and takes them with a sincere ‘aw shucks’ persona. He attributes a lot of his recent success to ‘luck’ and appears genuinely surprised at the good fortunes that have come his way. But watch his surfing and you’ll see that there’s nothing lucky about the attention that’s now falling all around him. The clip he put together for Innersection is chocked full of giant rodeos, 360’s, superman’s and every kind of grab known to even the biggest air guy you can conjure. His consistency is frightening, particularly when he reveals in the interview below that all the moves came from only a few trips over a 45 day period. Plus, he’s pulling into some throaty barrels for good measure. It should be noted though that he’s no air-only pony. Leif cemented an already solid reputation for big waves during several massive swells that unloaded on Tres Palmas in Puerto Rico this past winter. Unfortunately, he had no filmers on the beach, so there’s no record. Suffice to say, he charges.

With a supportive family, a good head on his shoulders and the enviable position of splitting his year between Puerto Rico and Montauk, Leif’s got the base to keep going bigger. Count my words…you’re going to see a lot more come out of this guy, including new moves and video sections. He’s a bit under the radar right now, but won’t be much longer. Check out his clip via the link at the bottom of the interview and throw a vote his way.

TSV: I saw your clip for Innersection and it’s pretty sick.

Leif: Yeah, mostly Lien grabs. Everything’s going towards different grabs now and you’ve gotta switch it up. Those are like the new kind of grabs in surfing.

TSV: Is that what Owen Wright was doing a lot in the Quiksilver NY final?

Leif: Yeah, Lien and Slob grabs and stuff like that.

TSV: So, Innersection is Taylor Steele reaching out beyond his normal stable of pros and giving other pros a shot at getting into one of his videos. So, how’s the process work to get your clip into the final video?

Leif: Yeah, you put all your own footage together for your own section and then compete against everyone else. It’s really who has the best video and then people vote for your section. So, it helps to have a lot of friends. Laughs

TSV: But you’ve got one of the Top 10 video clips right now, right?

TSV: Well, what do you think made the difference? I mean, you’ve got a million great moves and it looked like there was nothing you couldn’t do, but there’s a lot of good guys out there. Why do you feel you got selected for the coveted Top 10?

Leif: Ummm…I don’t know…Yeah, there’s a lot of really good [guys]. I was kinda surprised that I was that high. There were a few that weren’t as high that I thought were pretty ridiculous. I guess I got kinda lucky.

TSV: No…come on. That’s bull! You told me you got lucky at the pre-trials for the Quiksilver Pro contest too. Maybe it was your acting. {Leif hilariously plays a homeless surfer sleeping in his boardbag on a NYC subway platform}

TSV: Dude, I really thought you were homeless when I was watching it.

Leif: Oh man, it was ridiculous in the subway. There was one train that came by and like 50 people got out and they were like ‘what is wrong with this kid’ while I’m laying inside the boardbag. It was pretty funny.

TSV: So, what were you concentrating on for the movie?

Leif: Air 360’s and stuff like that. The lien is my favorite grab for those… So, everything I’m working on now is really a variation on those.

TSV: I have to tell you that I saw you pull the first one in the clip and for a split second I thought ‘Wow! That’s a once in a lifetime move’. But then Bam, Bam, Bam, you hit several more and it just showed that you are pulling these things all the time.

Leif: It’s just one of my favorite moves right now and I love doing those things.

TSV: So, the one thing that I was surprised not to see were some of the bigger waves you’ve had in Puerto Rico at Tres Palmas. I heard you had quite the big wave sessions down there. Any reason you didn’t include some of that stuff?

Leif: We just really didn’t have too many days filming down there…Yeah, I wish we had more time. We had a couple of Tres days, but we had no one to film.

TSV: What about your film crew? I thought the clip was extremely well put together.

Leif: Well, Calvin Knowlton has been helping me and films me a bunch. He’s been the one that’s filmed me the most. Then I went on a trip with Matt Clark to Nicaragua with Will Skudin (NY big wave charger) and we scored down there. Matt Clark is an insane photographer and filmer and we got a lot of stuff down there…he’s incredible behind the camera… Then Will’s helped me out a bunch and set me up with Etan Blatt and Etan made our film and put it together….over 3 days, all day. But he’s really good with editing skills and spent a lot of time on it and I think he did a good job.

TSV: Oh, I think it looks unreal. Have you met Taylor Steele yet?

Leif: No, I never got to meet those guys…I was stoked to see their comments [about the submitted clip] though. I thought it was one of the coolest things. I never thought I’d be hearing from them.

TSV: So, you’re having a really good run between the Top 10 Innersection clip and the Quiksilver Pro pre-trials. What’s going on? You’ve got some good momentum.

TSV: Are you involved in other video projects?

Leif: No, we’ve just been working on this project.

TSV: So, where did you travel for this footage?

Leif: We went to Indo for 7 days…1 day in Montauk, a 10 day trip to Nicaragua and a couple of days in Puerto Rico…Hawaii for 12 days, but we didn’t get much swell there.

TSV: That was it? All those waves in the clips came from just those trips?

TSV: That’s crazy. That’s a big hit rate with those airs then if you’re pulling that many over that few trips. That’s amazing. So, what would it mean to you to get into Innersection?

Leif: I mean, geez. I’ve always wanted to get into a Taylor Steele movie and it’s pretty much the only goal I’ve ever had surfing. It’s all I ever really cared about growing up.

TSV: Well good luck, man! I’ll be voting for ya’! Thanks for your time and I’ll see you in the water. Cheers.

Not only was Leif selected for the Top 5 clips for Innersection, but he won the friggin’ round! Though I’m not surprised. His 57 rodeo flips, 213 supermans, 423 air reverses and sick barrel rides were far and away the best out of the international crew of Top 10 submissions. I said that Engstrom was someone to keep your eye on and now there’s no doubt. Next up for Leif is that he realizes a life-long dream of being in a Taylor Steele movie, then who knows what…Oh and he’s eligible for the best of the 20 clips selected throughout the year and could be awarded $100K. Not bad for a kid who doesn’t have (but should) a clothing sponsor. But the surfer that walks away with the cool $100K is up to you. Watch the video and then vote for our fellow New Yorker who flies higher than you ever will, is nicer than you’ll ever be and could use the cash. Cheers!

Also be sure to check out: