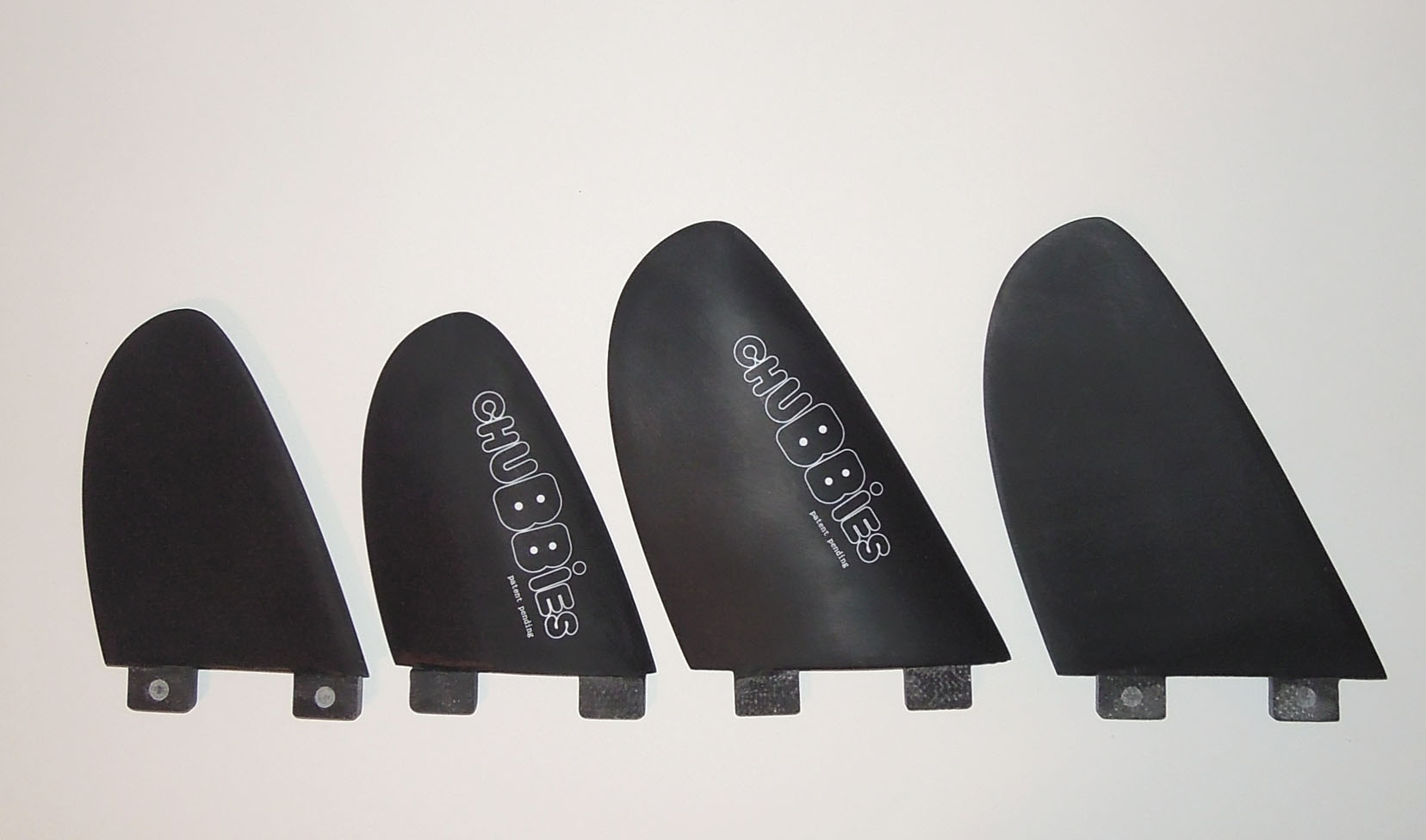 If you only look at them for a second, the Jimmy Quad fins from Hawaiian fin company Chubbies look a lot like keel fins. Round with almost no rake. Kinda like classic fish or mini simmons templates- except more vertical.  But when you look a little closer, you notice they’re probably the most foiled fins you’ve ever seen, and they’re not just a little vertical- they’re pretty damn upright, not to mention crazy thick.

The extremely foiled insides and the absence of rake cause a tremendous amount of lift and reduces drag. The thickest point is extra thick which makes the foiling seem even more dramatic. Having this heavy contrast and cambered design generates serious drive through the tail and a ton of dynamic water flow under your feet. View of inside foiling on Jimmy Quad fronts as compared to a regular flat foil.

Considering there’s essentially no sweep to these fins, they offer a ton of hold. As a midweight surfer (150-160lbs,) I can safely say the Jimmy Quads from Chubbies could be used in the biggest waves around without worrying about spinning out or losing grip.

If you’re not going to be surfing large or especially powerful surf, the Jimmy Quad set provides some options. I tried running just the quad fronts with Chubbies prototype 50/50 foiled center trailer. With this setup I was able to throw pretty tight, close together hacks and even though there was a lot of hold, the setup maintained drivey, with heavy speed as if I was surfing a much looser setup. 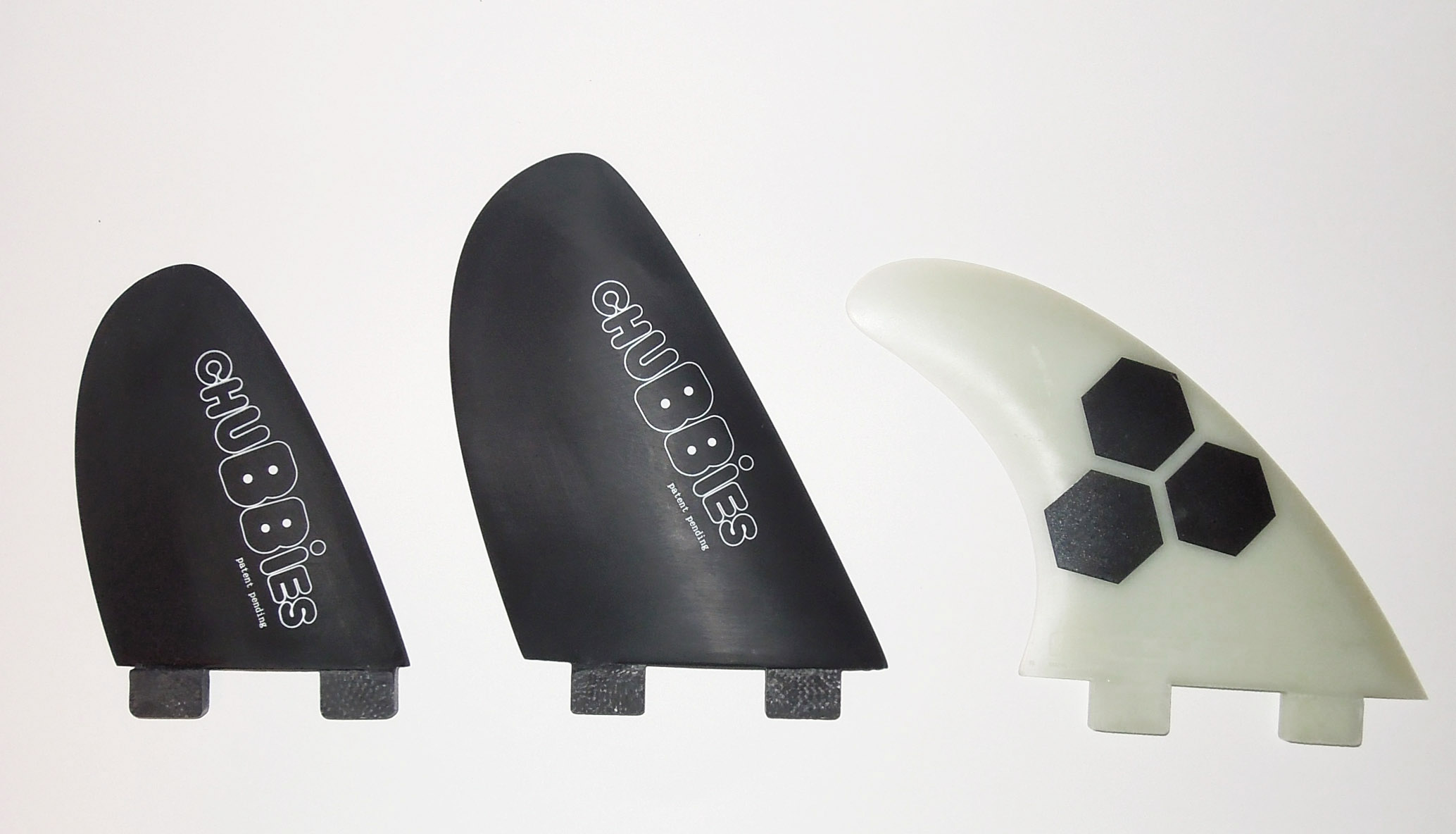 Jimmy Quad rear and front next to an AM-2 fin.
Some front footed surfers, or lightweight surfers, might still find this to be a bit too much hold. In this case I recommend trying the Jimmy Quad fronts with just a knubster or a darc drive type of mini center, for basically a super twin setup.

On that note, I also tried running the quad fronts alone- as a straight up twin- on a fishy board in smallish waves. This setup increased my overall drive even more, but there was also suddenly more drift in my turns- especially compared to the high level of hold the Jimmy Quads had given previously. I liked this feel though, and it was still way less drift than I’m used to on even a dedicated twin fin setup. The Jimmy Quad fronts actually worked very well as a stand alone twin set. 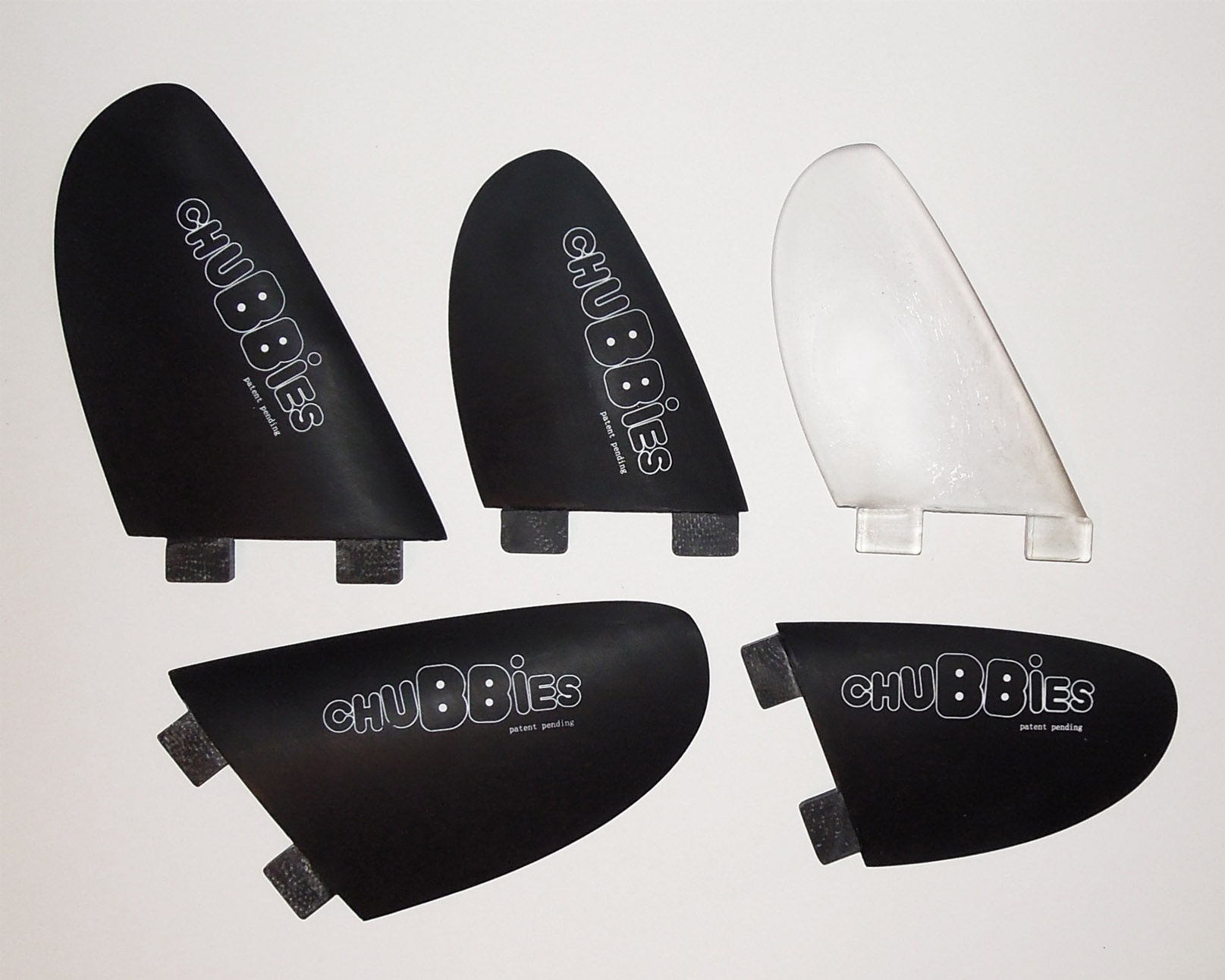 All in all, the Jimmy Quad fins from Chubbies are not only unique, but fairly versatile. The Jimmy Quad set equipped standard provides plenty of hold in bigger waves or as an all around template for heavy surfers. You can also swap out the trailers for smaller ones (like GL’s) or try using just a center stabilizer with the fronts (like Chubbies prototype or even a tiny center like a Knubster.) You can even run the fronts alone for groveling crumbly or weak waves. There was a lot of really fun experimentation involved in testing these out.
It’s also worth mentioning that these work especially well if you’re a backfooted surfer (I could see Tom Carroll absolutely crushing with them plugged into one of his guns.) The Jimmy Quads cup the curve of the wave and generate a lot of lift- enabling really diggy, snappy pivots. And the cambered foiling flushes the water under the tail super fast, so you’re regrabbing the wave immediately after throwing a big hack.

Diagram of Chubbies fin foiling. Photo: Chubbies.
Definitely check these fins out. The Jimmy Quad from Chubbies. Also be on the lookout for Chubbies prototype 50/50 foil center fin trailer.

For more info, check out the Chubbies Surf Fins website