Some Lagu towels at the beach. Photo: TSV

The company LAGU has set out to be the world’s first beach-friendly beach blanket. Unlike ordinary towels which tend to be clingy and retain water, Lagu beach blankets repel sand and dry very quickly. This translates into a product that’s more convenient for you, and also reduces sand displacement on the shore.

Some field testing by the guys at TheSurfersView definitely confirmed these claims. The sand brushed and fell right off Lagu’s linen blend towels- even wet sand. And while a typical cotton towel can take hours or more to dry in the sun after use, Lagu’s beach blanket was dry in about 10 minutes.

They come in 6 different colors and are sized at 45 x 60 inches. They also have a really cool “modular tag”, which allows you to fold up your towel when you’re not using it, and tie it up using a button and flap that’s built right into itself. Because of how sand repellant they are, we found that they make excellent changing mats for getting in and out of your wetsuit on the beach. A lot of products that were made specifically as changing mats absorb water and retain sand and are gross to carry around. By contrast, the Lagu blankets are extremely light and dry super fast, and the sand comes off them instantly.

It’s worth noting that on initial use, the Lagu beach blanket did not feel as soft as a traditional cotton towel. It’s made up of more tightly woven linen fabric than a typical cotton towel, and while this allows the Lagu towel to be as sand repellant and quick drying as it is, it makes for a towel that does not start out quite as soft. But after a few washes, I found that it became much softer. 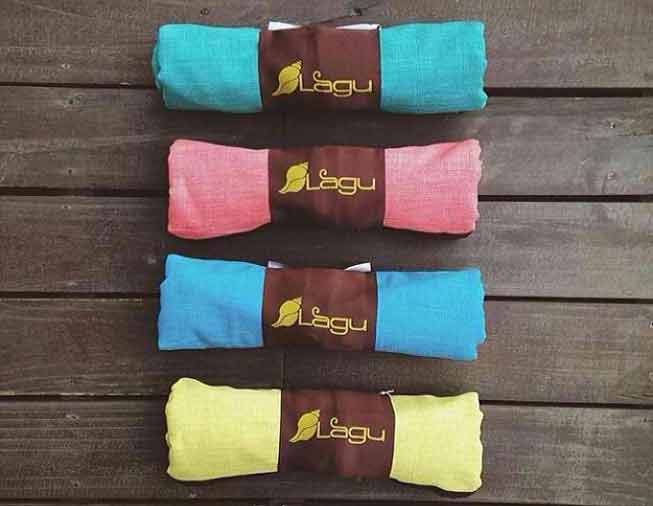 Nice shot of some of the color choices. Photo: Columbia Sportswear

All around great product, and surprisingly versatile for a towel. Weighs very little, dries extremely fast, is eco-friendly, and doesn’t hold onto sand at all.

Highly recommended. Find out more at: