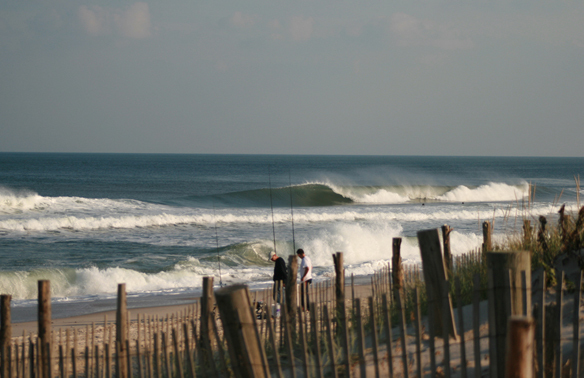 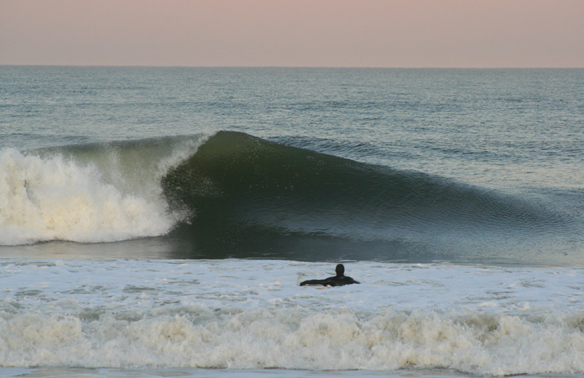 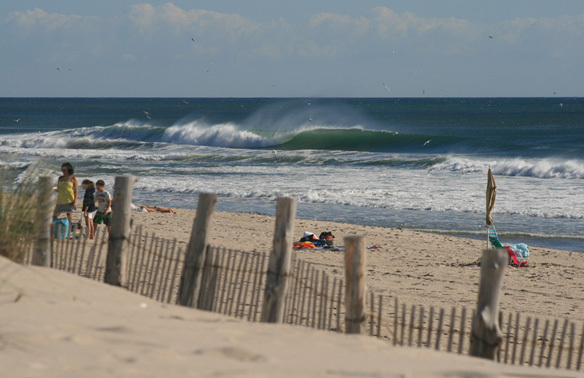 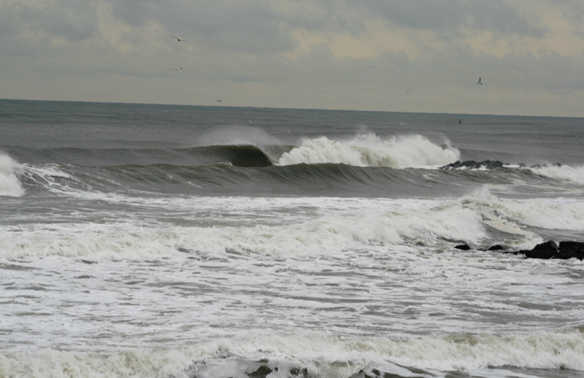 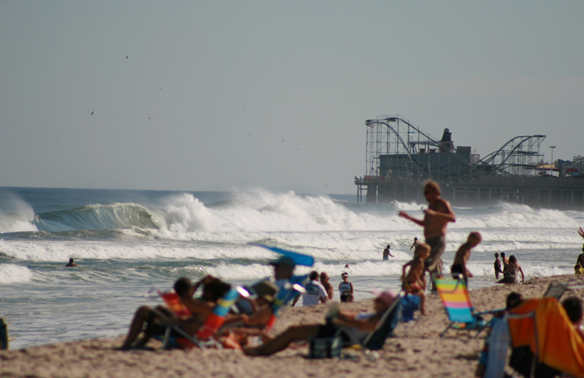 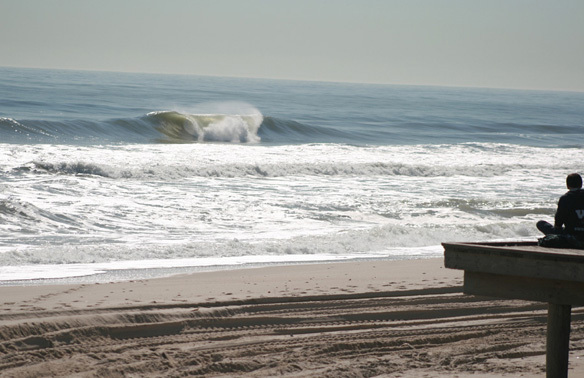 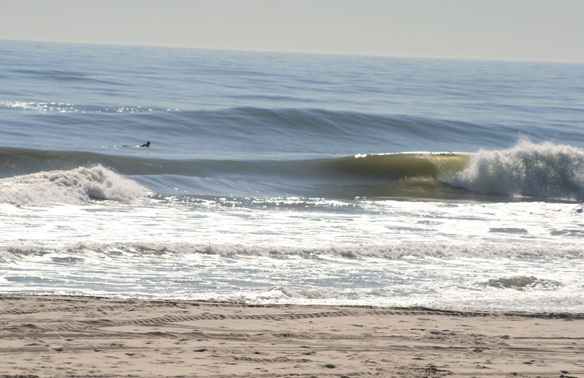 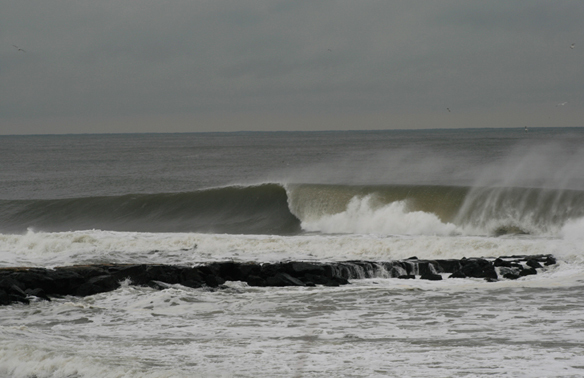 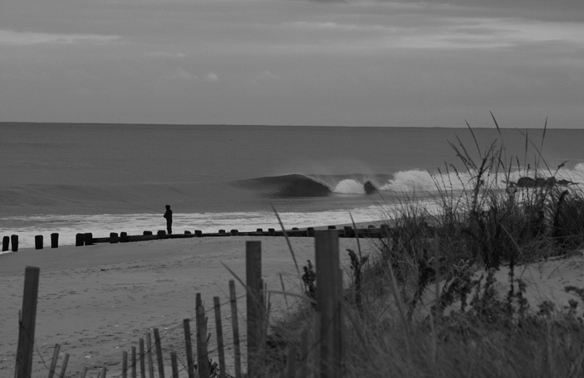 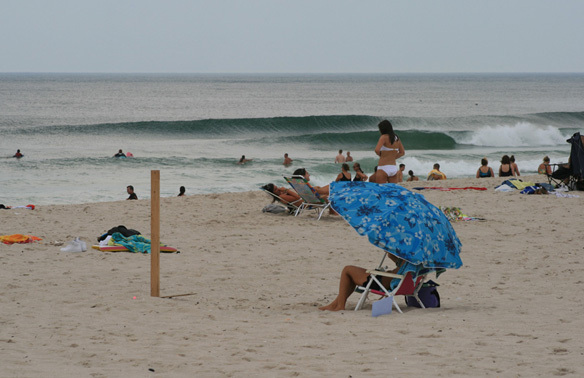 You’ve got to love the pack mentality.  A hundred and thirty miles of coastline in New Jersey and most surfers still flock to the same spots to battle with a crowd.  The Pier, North End, 7th Street, The Inlet, The Cove and States are some of the tried and true on which people rely.  Regardless of swell & wind direction, tide or sandbars, locals believe that nowhere else could possibly hold the consistency and perfection that these often do. Only problem is, so do a hundred of their closest friends.  Everyone from kooks and local pros on shortboards, longboards, boogies and sometimes even kayaks bang rails on the same tight take-off zones when empty waves spin off a hundred yards up or down the beach. The prevailing thought apparently being that if those empty waves were any good, people would flock to those too.  But are those waves on the outskirts really worth a look? Is there anything epic peeling off in seclusion?

Does a bear poo in the woods?

I’ve never liked crowds, having grown-up spoiled on a beach that had few, if any, other surfers. Regardless of conditions, I could always count on either being alone or sharing the line-up with no more than three friends. As a result, if I pull up and see a crowd these days—say more than five people—I move on. I’d trade seclusion for perfection any day of the week.  But despite the willingness to negotiate for less, I’ve often uncovered some lil’ jewel completely overlooked because it wasn’t the nearby well-known break. More than a few times, I’ve found myself surfing flawless hundred yard lefts alone, while praying the angry-looking mob on the other side of the jetty doesn’t discover my momentary slice of paradise.

I’ve learned over the years that a little searching and creativity can yield some amazing results and often right under the nose of those loyal packs. Below are a few waves I’ve discovered along the way.  While none of them are named, I can assure you that all fall within the confines of the Garden State and all are very real. Of course, given that we live in a sand bottom world, each could vanish with the next swell or storm, but that only gives birth to others. The point is to get creative and paddle away from the pack. Maybe you’ll find something like these:

Best on a south swell; this right pointbreak initially throws a grinding barrel twenty feet from a ten foot pile of bone-shattering rocks.In fact, people on the beach can’t see those taking off. Drop is fast and sketchy, but if you pull it, you’ll be slotted for the next thirty yards. The wave then hits a deepwater gulley, backing off to allow however many thwacks you can fit into fifty yards.Crowd is never an issue, though they stalk close by.Break holds up to 6’.

A true rivermouth created by the outflow of a pristine bay, the break sits a quarter mile offshore on a shallow sandbar. It’s the place to go when everywhere else is flat, as it snares N, S & E swells. Peaks abound and the only decision is which one to ride. Break could hold almost any size, but already heavy currents get worse with increased swell. Lots of water moves around here on even the smallest of days. Also, be wary of the toothy sea life known to wander in and out of the mouth of the bay. The ocean is still alive here like few places in the east.

At a quarter mile offshore, this system of reef breaks (sans the coral) offers countless peaks over a three mile area.According to locals, their formation decimated the normal inside sandbars, causing a mass exodus to the north and south. But salvation was found by the lucky few who made the paddle.Sitting so far out to sea is cool in and of itself, but the limitless room to move makes the rides longer than the typical sandbars. Breaks could hold virtually anything from almost anywhere (but W of course).Definitely better on low tide as it goes fat on its approach to high.

This ain’t your momma’s beachbreak.An otherwise decent A-frame is transformed by a tenacious rip making a beeline seaward from the beach.Small days are okay, but the true nature of the beast comes out when it’s overhead and firing. The bottom sucks almost dry (I’ve seen shells in the face), while a thick lip pitches further out than it has a right to. The drop is not for the faint of heart, nor is the black barrel that spins and spits down the line. Pull in and hope it doesn’t pinch. The wave loves NE swells, but just about detests anything else, getting messier than a two year old with a bowl of pudding.

A left pointbreak that will peel for over a hundred yards, this break is as dependable as an addict since the slightest shift in sand will destroy her. As a result, it’s off the crowd’s radar, but she’s always worth a check…usually my first. When conditions come together (N, NE swell), she’ll line-up like she just rolled off your notebook cover. The wave isn’t fast or hollow, just playful and perfect. Handles only up to about 4’, but is surprisingly powerful when small.

A subtle crescent-shaped beach forms right and left pointbreaks, bookending a deep cove. The breaks aren’t obvious until a set rolls in.The right is slightly longer and much more powerful, while the left is user-friendly, rolling more than throwing. Theory is that the left can hold really big given its deeper water, but haven’t seen it yet. The breaks love E swell and their obvious S and N, NE directions respectively.Wind needs to be dead W, as NW just won’t cut it.When it’s on, you’ll pinch, slap and then punch yourself to make sure that you’re awake.

Seclusion and perfect, dream-like waves are on your doorstep.You just need the desire to search, a keen eye for potential and patience. And patience is the real kicker. Set-ups come and go in our area like a band of travelling gypsies.The thinking has to be that the death of one spot must bring the birth of another. The key is to find out where the sand went.So, start looking around, be prepared and get curious. The payoff is leaving the crowd in your rearview mirror, as you head toward your own hard-earned, heaving slab breaking all by its lonesome.