Choosing the right fins for your surfboard

The fins you put in your favorite surfboard can play a huge role in your performance on that board. Some people even claim that your choice in surfboard fins can impact up to 40% of your performance. With so many different boards and different conditions, it’s important to think about different fins and fin setups that work the way the shaper intended the board to be ridden.

The best thing is, just like surfboards, fin design, templates and experimentation is almost endless.

Before you dive head first into testing, its great to know a little bit about how each characteristic can impact your surfing performance. Lets start with the basics. The part of the fin that is actually attached to the board is called the base of the fin or the fin base. A longer (or wider) fin base is going to help with your drive. This translates into drawn out turns. Compare this with a narrow, or short fin base that is going to let you turn a little easier and sharper but without as much of that drive. Photo: On the left – The AM2 Futures Fins (top) have a longer base than the Haydenshapes Futures Fins (middle) that are still longer than the F4 Futures BlackStix Fins (bottom). On the right is the EA BlackStix Futures fins.

The fin depth or fin height refers to just how far the fin extends away for the bottom of the board. A deeper fin in the water is going to have more hold and stability than a shallow fin. The more shallow a fin, you are going to get more release when you throw that tail around through turns.

When you’re looking at the arc of the fin and how far back it tilts or sweeps, you’re looking at the fin rake. The larger the degree of rake, the more drawn out your turns will be. This is great for those bigger days with a nice long wall to work with. Less fin rake and a more upright fin template, means that you’re going to get some more pivot out of them – great on junkier, weaker days. Photo: The degree of surfboard rake or surfboard sweep determines whether you have a looser feeling in your fins or you get more pivot out of them.

The fin foil is an aerodynamic shape from front to back of the fin. Much like the wings on an plane, this foil generates lift under the board. A fin is usually going to get thicker through the center of the fin and taper smaller out towards the edges.

There are a couple of types of fin foils with many variations on each. Side fins (on twins, thrusters and quads) are generally flat, sometimes curved inward on the inside and with a foil on the outside. Center fins will mostly have equal foil or double foil on each side. These center fins are found on the back of thrusters, single fins and sometimes the rear fins on quads. Double foil can also be found on some more traditional twin fin fish models. Photo: Fin foil determines the volume of a fin as well as how the water moves past your fins’ sides.

Fin Cant is the degree of outward angle a fin has in relation to the bottom of your surfboard. If a fin has zero cant it’s position straight up and down at a right angle to your board. This is going to be fast in a straight line, but it won’t give you as much responsiveness through turns. If the cant of your fin is larger, your going to gain a little more of that responsiveness through your turns. It means you can maintain some more drive when your board is tilted on the rail. Photo: More Fin Cant means your fins are angled outward in relation to the bottom of your surfboard.

The toe of your fins set up is relating to the angle that your fins are pointing at towards the stringer. This occurs a lot in side fins with the front of the fins pointing towards the center of your board. This can help create pressure on the outside foil of the fin. This in turn, allows you to again have a little more responsiveness on your board. 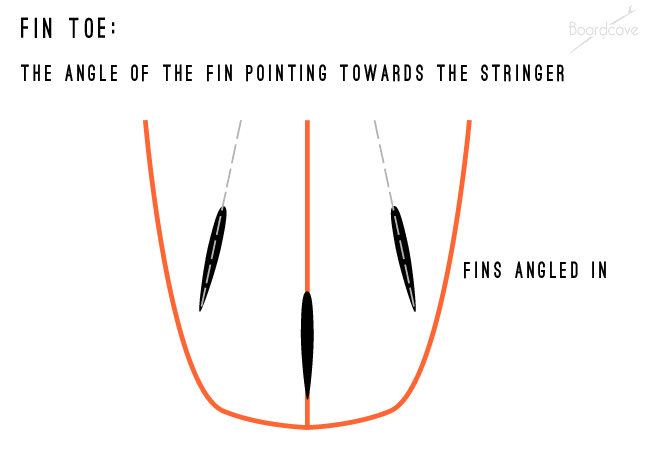 Photo: The Toe of a surfboard fin above shows the side fins angled towards the stringer.

Check out some of MickFanning thoughts on thruster vs quad setups as well as why he chooses to change up his FCS II fin sizes.

Behind The Curtain - Mick Fanning

Video:Mick Fanning explains how he uses his FCS II fins in different conditions.

Now that you’ve got the basics and all the lingo for fins, you need to understand a little more complicated aspects about how fin shape can contribute to the overall surfing performance.

Your fin’s shape impacts directly on how your surfboard is going to perform. One way to comprehend this is to use a Single Fin for our descriptions.

When you get down to it, thrusters, quads, side fins are more or less variations of these characteristics just in a smaller version.

Flex is one of these characteristics that can directly relate to fin performance.

Flex will contribute to your projection out of turns, which in turn will produce your speed and effect control. More details on flex will follow, but for the purpose of this article, lets look at how flex and shape of fins go hand in hand.

Lets go back to our longboard and check out how it’s going to perform using 4 different fin shapes.

The Flex Fin, the Rake Fin, the Pivot Fin and the D Fin. 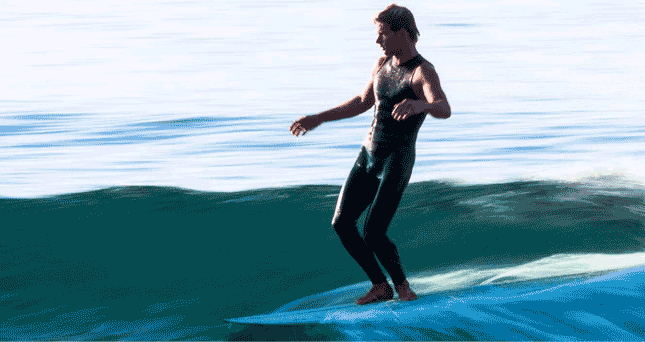 Photo: Corey Colapinto of Canvas Surfboards getting groovy on some waves.

The Flex Fin (with maximum flex) is a really versatile fin that can be used in just about anything from shorter stubbies to 10 foot nose riders. These flex fins are going to feature a wider base that really tapers down into a narrow tip and doesn’t offer too much drag. When coming off a bottom turn, your flex fin will give you a tonne of projection.

This reflects what we mention earlier where the more rake you have in your fin, the more you can draw out your turns compared with a rigid upright fin template for more pivot in tighter turns.

The Rake Fin (with medium flex) is the next most flexible and sits between the flex fin and the pivot fin along the spectrum. With a wide base like before but with a little more width in the tip of the fin you can see a fairly vertical base that sweeps back towards the end. This combines nicely the projection and maneuverability of the flex fin with some of the hold you get from a Pivot Fin.

The Pivot Fin (with very little flex) is your standard go-to fin-shape for nose riding. You can recognize this fin by it’s full, vertical outline with a wide base. It’s designed to slow you down a little and help keeps the tail further in the water while you’re up on the nose. You can also still step on the tail and pivot (swing) the board around in a relatively tight radius.

The D Fin (with no flex) isn’t going to be the most forgiving fin or the most versatile to surf. Usually you see these on a more classic, heavier log. A little harder to turn and not as stable when you’re on the nose, this fin is more for getting maximum trim straight down the line.

With a super wide base combined with a super wide tip, these fins get their name from generally appearing in the shape of a D. Sometimes you can find them with a straighter, more vertical forward edge with a curved side aft, and sometimes they’re found with curved edge forward and vertical edge aft.

You would usually place these fins as far back of your board as possible for maximum down the line trim. 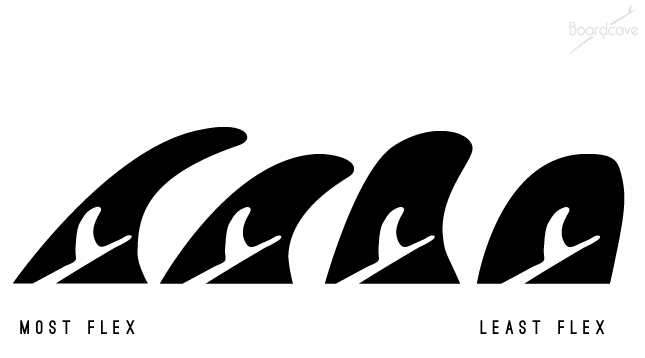 Photo: Flex your fins! The degree of flex from least flex to most from left to right: The Flex Fin, the Rake Fin, the Pivot Fin and the D Fin.

So now you know a little more about fins. With literally an infinite number of surfboard and surfboard fins combinations, you’re going to have a good time testing them all out.

Check out Part Two of our Fins Guide below for a better understanding of materials and construction in surfboard fin design.